THE EARLY YEARS OF THE OAKLAND VOLUNTEER FIRE DEPARTMENT

Responding to the Ashes
History records that in November, 1903 a major fire was discovered at the large barn of the Calder estate then located where the Coppertree Mall is currently situated and the need for a fire department in Oakland became apparent. Six years later on June 10, 1909 a informal meeting was held at Ivy Hall to create a volunteer fire department in Oakland. Ludo Wilkins, the owner of the Wilkins Brush Factory in Oakland, was appointed as the first fire chief. And he served six terms as chief until 1916. 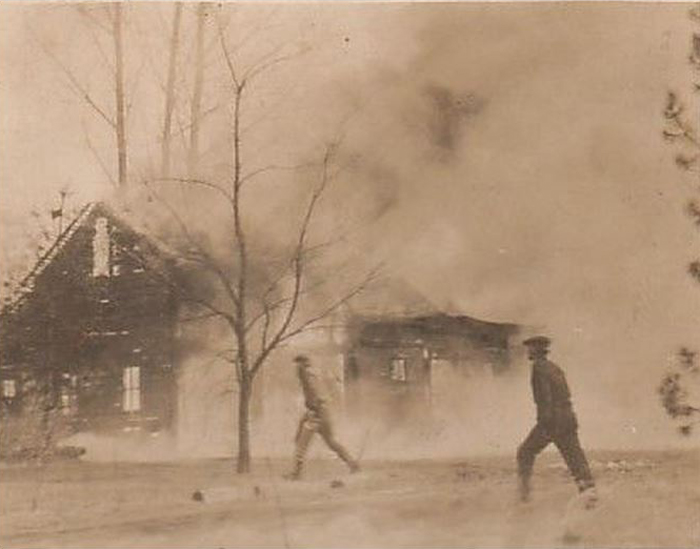 In 1909 the OVFD was a fire department on paper. But two years later when a fireman’s ball was held in December, 1910 it raised $300, sufficient to purchase the land from Mr. David C. Bush and materials for the firehouse. Gideon DeWitt was the builder. In December, 1911 the Oakland Volunteer Fire Department was officially born with the passage of an ordinance by the mayor and council establishing it as a formal part of this borough. On January 1, 1912 Mayor Edward Page officially accepted the deed to the new firehouse.

1910 Original Members of the OVFD

But by 1920 interest in the fire department began to lag until Harry Gale McNomee began a successful campaign to re-ignite interest. By 1935 Mr. McNomee became fire commissioner, the only exempt fireman ever to hold the office.

The OVFD suffered another severe manpower shortage during WW II as the complement of active firemen was reduced to eight volunteers. Seniors and women were recruited to serve in the Oakland Fire Reserves.

In 1922 Ivy Hall, Oakland’s Town Hall, was destroyed by fire. The decision was made to expand the firehouse and move the Oakland offices to it. The firehouse was doubled in size and a second floor was added. After several expansions it was used as the municipal offices of Oakland, the police department, a voting place, a hall for public affairs, a gym for the Oakland Military Academy, Oakland’s jail and in 1939, it served as the home of the Oakland Library. 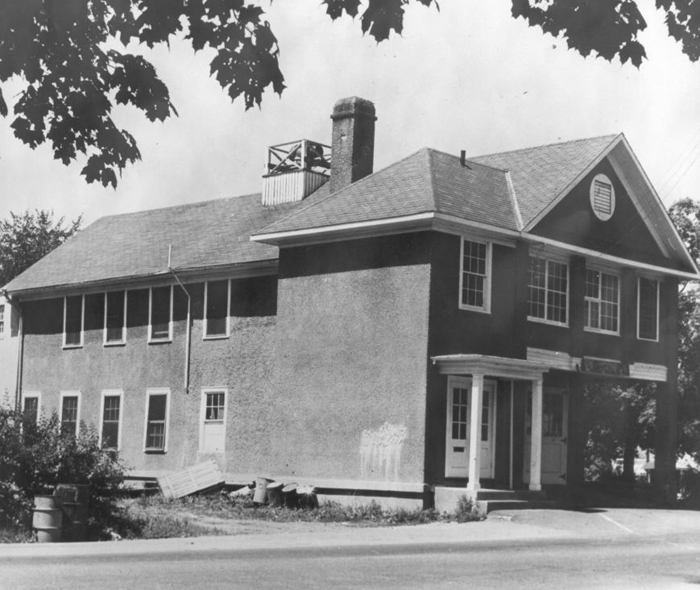 By 1944 the original firehouse would be reinforced to accommodate a new fire truck and again in 1954 when it was expanded adding 4 rooms in the rear of the building. Hence the original single story building housed virtually every major official function of Oakland.

In 1959 a new borough hall was built. Proposals were made and officially sanctioned to build an emergency services building to house both the fire department and the ambulance corps. This initiative was also opposed by the OVFD and it failed.

In 1911 there were only a few telephones installed at that time. The immediate solution was the erection of 3 locomotive rings in strategic parts of Oakland. In 1917 the OVFD Ladies Auxiliary donated a new, 1,280 pound fire bell to be placed in the firehouse belfry. However, it could not be installed because of its great weight and was subsequently made as a replacement of the locomotive ring near the railroad station. It served proudly there until 1925 when it was replaced by a siren in the belfry of the firehouse.

In November of 1942 the Oakland Volunteer Fire Department donated the original locomotive fire rings and the original fire bell to the war effort. The fire alarm rings standing in front of Yawpo and Hiawatha firehouses are not the originals.

The siren alert system was augmented by the civic-minded Art Seel who owned a tavern on the NE corner of Ramapo Valley Road and Yawpo Avenue. He was the connect point between a reported fire and the initiation of a response. A citizen could simply dial #5831 to reach Mr. Seel and the OVFD.

This relatively ad hoc alert system was replaced in 1952 by a combination of a new and more reliable siren network coupled with a new telephone alert system. Telephones with a special siren activation button were placed in the homes of key first responders. That system was ultimately replaced in the 1970s by Instalert radios to call first responders. That system in turn was phased out in the late 1980s in favor of pagers. Currently the Oakland Office of Emergency management is sponsoring the Modern Audible Emergency Alert System based in part upon advanced siren technology using directional sirens. It’s used for fires, school closings and as a warning system.

Some fires are remembered more than others. The following are standouts.

The first was really two fires occurring simultaneously in 1916 when the barns of Charles Sheffield and Edward Page caught fire at the same time. This overwhelmed the leadership of the new Department as both structures were lost completely. As a result, Ludo Wilkins was fired as the Fire Chief.

A disastrous fire struck the Page estate house nine years later in 1925 when it was Mount Melchesidech, a Catholic seminary. The cause of the fire was unknown and the difficulty in fighting the fire was magnified by the distance of water from its private reservoir. The wood building was completely lost. Tragedy struck Oakland on March 4, 1942 when Osmond Edward Saunders died in a fire in his home. It was the first fire-related fatality of the OVFD.

The original ‘equipment’ of the OVFD virtually consisted of some well-worn water buckets and a few fire extinguishers. The OVFD raised $210 via charitable events, oyster supers, etc. to purchase a hand or horse drawn 50-gallon mobile soda-acid tank. 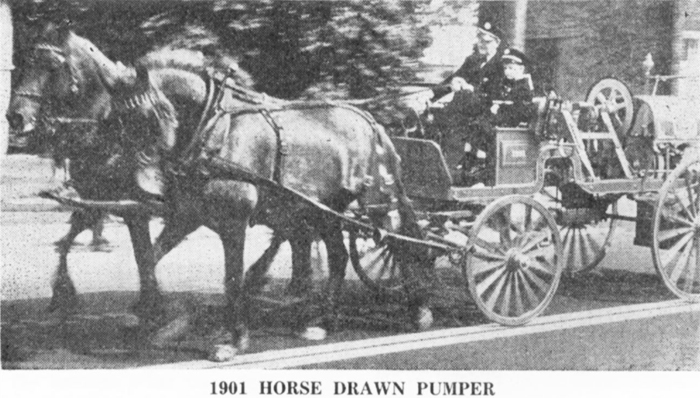 In 1916 the borough purchased a hand-cranked 1917 Ford Model T truck that carried approximately 30 fire extinguishers and a few firefighters. In 1920 the mobile capabilities of the soda-acid tank were upgraded by the generous donation of a 1920 Charmers automobile by Mrs. Remington Vernam. Ultimately fire fighting capabilities were augmented by the placement of two and one-half gallon fire extinguishers in various homes throughout the borough. In 1925 the first true pumper was purchased by Oakland. This was augmented in 1929 via the purchase of a Chevrolet 350 gpm pumper. Both trucks enabled the OVFD to continuously use any available natural source of water to fight a fire. 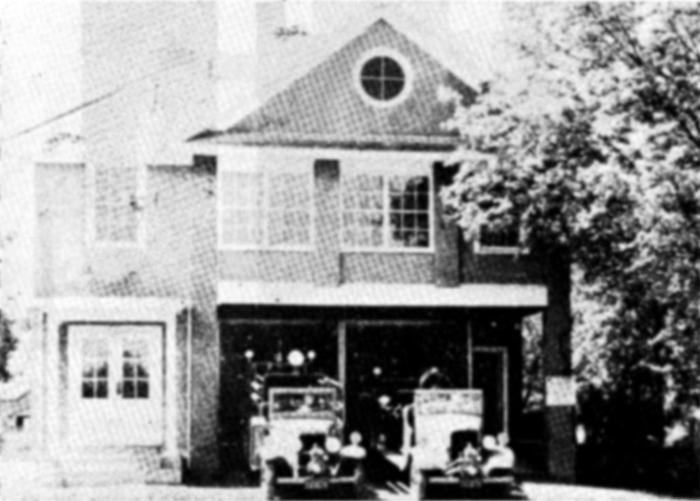 In 1931 as eight miles of water mains and 80 fire hydrants were installed. No longer would our firemen be restricted to either carrying their own water and chemicals to a fire or limited to obtaining water from ponds, brooks and streams. Today there are approximately 500 fire hydrants connected to over 60 miles of municipal water mains in Oakland.

The first accomplishment was the raising of funds to purchase Oakland’s first fire alarm bell in 1917. Cecelia Munn, Nellie Hopper and Cora L. McNomee formed the committee appointed to purchase the bell. During WW II many served as volunteers to directly assist the OVFD to extinguish fires.

In 1953 the men of the OVFD manned the firehouse during an ice storm to receive any calls of a fire while also providing auxiliary lighting. During the floods of 1955 theses men evacuated families along the Ramapo River, housed the homeless in the firehouse and even obtained bedding for these newly displaced families. 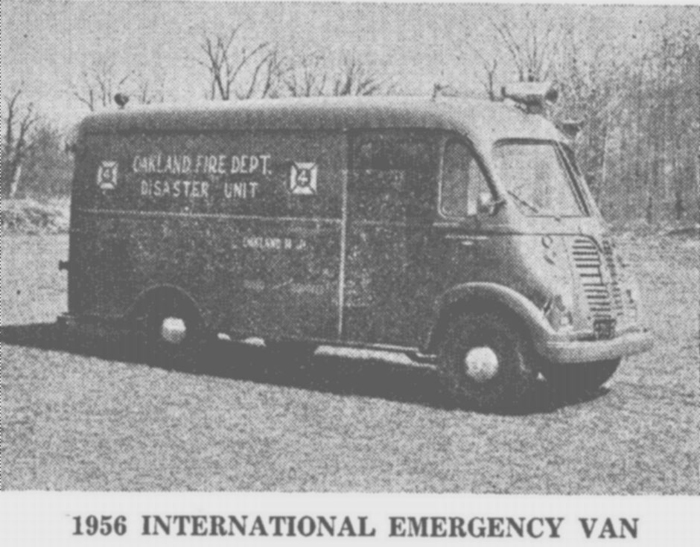 In more recent memory the OVFD was called upon to assist following a shooting incident at the FRG Complex to find and assist the wounded. In 1991 it responded to a very dangerous situation involving a major gasoline spill as a result of an accident between tanker truck and an auto.

Tropical Storm Floyd in 1999 again tested the OVFD in the Ramapo River Reserve. A mudslide occurred, proceeded into a private home that in turn ruptured a gas line. The entire complex was safely evacuated and a potential disaster was averted. 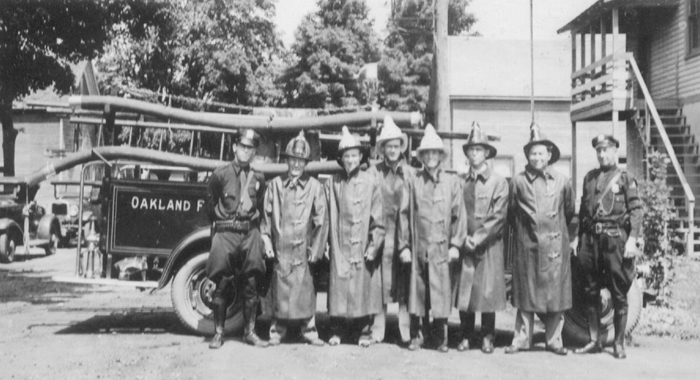 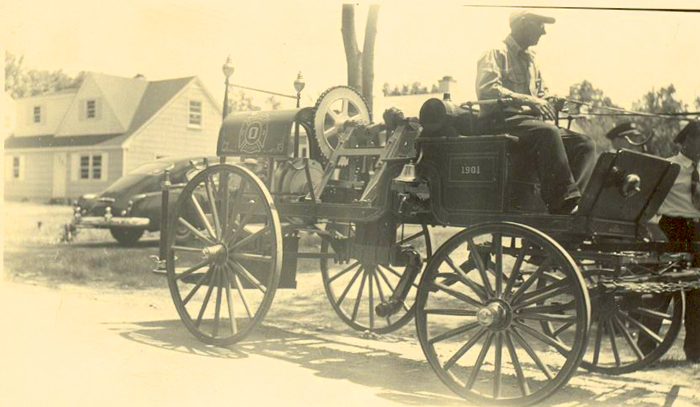