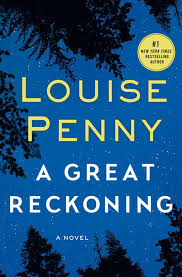 In Louise Penny’s most recent mystery novel, Armand Gamache had embraced retirement in the idyllic village of Three Pines, hoping to heal his wounded body and spirit. Betrayed and nearly killed by his superiors and peers within the Surete of Quebec he understood that the corruption of these leaders had contaminated the entire police system. The Surete’s academy was turning out sadistic, brutal officers who intimidated rather than supported the populace. Accepting the challenge of taking over and making over the Academy, Gamache saw his ultimate mission as rooting out the leaders who corrupted their students. He appointed leaders who would be positive role models for cadets; he also selected recruits who would most likely be open to his belief in the police’s responsibility to be moral leaders in the society.

Given the new administrator’s objectives for the Academy, some of his methods caused much confusion. He retained two of his enemies whom he knew were at the core of the Surete’s corruption. Michel Brebeuf had been turned by the temptations of wealth and power, eventually betraying Gamache, his friend since childhood. Brebeuf did penance through his lectures to students about the pitfalls and temptations inherent in police work. Serge Leduc’s selection was an even greater surprise; he was Gamache’s mortal enemy. Cynical, belligerent, and defiant, Leduc carried his bitterness into the classroom and into his close relationships with students whom he selected. Gamache’s apparent purpose in retaining his antagonist was to examine how he was subverting the values of the cadets—and to help the program to alter its moral and ethical direction. While his objective seemed noble, the methods at times seemed questionable, as he seemed to find comfort in Brebeuf’s squirming in disgrace—and Gamache gave Leduc free rein to undermine his commander’s authority.

As a part of his study of the Academy’s operations, Gamache focused on four students who appeared to be close to Leduc. Jacques Laurin, a third-year student and the leader of the class, was nasty and brutish, despising all that Gamache stood for, and embracing the cynicism of Leduc. He continually tried to encourage disrespectful behavior among his fellow students. Huifen Cloutier, a third-year female cadet, was not as violently opposed to Gamache, but her loyalty to her chief was questionable. These two had been under Leduc’s tutelage for years. Amelia Choquet and Nathaniel Smythe, both first-year students, were selected by Gamache, though neither seemed to fit the mold of the “perfect” recruit. Nathaniel was gentle and sensitive, certainly not the macho type associated with the Academy’s reputation. But Gamache sensed that the young man possessed an unusually sharp mind, a compassionate soul, and the drive and patience to search for evidence. Amelia was a “Goth” with tattoos and body piercings, a strong suspicion of authority figures, and a history of substance abuse and prostitution. Gamache saw fierce determination and desperation in this young woman, as she attempted to grasp onto the last straw—a profession that could help her to earn her way to respectability and self-worth.

Typical of a Penny novel, a second, seemingly unconnected plot converged with Gamache’s new challenge. Workers discovered a decades old map in a wall of a building being renovated. The artistically designed map depicted areas around Three Pines, but also had some unusual features: drawings of a rose, a snowman, and a pyramid; and incorrect or missing names of villages. As a challenge to the four students, Gamache gave each a copy of the map with a challenge to decipher it. The murder of Leduc, which was obviously staged to look like a suicide, prompted Gamache to bring the four cadets to Three Pines, ostensibly to pursue the mysteries of the map, but actually to protect them, because he was certain that their connection with Leduc had jeopardized them.

The murder mystery unraveled, but not before Gamache was implicated through a number of pieces of evidence. He used his apparent vulnerability to expose the real culprits, who had hidden beneath the façade of moral righteousness. At the same time, Gamache had to come to terms with his own darker side of disappointment, anger, bitterness, and a desire for revenge. While seeking to protect the four students from physical harm, he was also challenged to protect them from the darkness that had contaminated the Surete and his own soul.

The mystery of the map also unravelled as the two younger students dug diligently into the history of the cartographer, as well as into the tragic losses suffered by the Three Pines community in World War I. Incorrect names of villages and the unusual symbols complicated their research, as did a depiction of the map in a stained glass window in the village chapel. Their investigation revealed a story of terrible loss and unfathomable sorrow. But it also revealed a deep sense of nobility in the private acceptance of loss, and the desire for isolation from the world’s evils.

As usual, Penny presented an impressive picture of Gamache: rational, insightful, compassionate, yet struggling with inner demons which had damaged him, challenging his optimistic view of humanity. He struggled against corruption, striving to set positive examples, but could not resist the temptation to crush and humiliate the corrupters. Penny’s novels are definitely mysteries that study the conflicts of the soul.