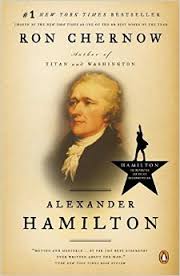 Thanks to Lin-Manuel Miranda’s smash hit, “Hamilton,” the biography which inspired that play has resurfaced as a must-read (or re-read) work. Ron Chernow’s methodical research and incisive analysis has produced a vivid portrait of the life and personality of one of America’s most brilliant founding fathers, tracing his meteoric rise from the shame of illegitimacy and poverty to great heights in the Revolutionary military and the newly formed government. Hamilton became an articulate advocate for the shaping of the Constitution, a meticulous organizer, and a visionary in his profound understanding of the economic needs of the new country. In spite of his many accomplishments, he was among the most hated of the young country’s leaders—hatred that was in no small part the result of his over-bearing ego: his condescension towards anyone who disagreed with him; his inability to filter his volatile temper in oral or written debates; and his continual pushing questions of honor to their limits. Chernow’s portrait of Hamilton reveals a man whose brilliance was a major factor in the country’s successful birth—yet whose character flaws led to his political expulsion and ultimately to his tragic death.

Chernow calls Hamilton’s childhood in the West Indies “horrendous.” He lived in shame as the bastard son of a man who had abandoned his family. Hamilton’s mother passed away when he was in his early teens, and the relative who was named his guardian committed suicide. Young Hamilton demonstrated his precociousness and his take-charge personality when he clerked for a trading company that sold supplies to planters. He displayed a “phenomenal stamina for sustained work” as he observed the practices of planters, traders, and smugglers. Besides building an impressive work ethic, he formed strong opinions. As a boy, “…he came to detest the tyranny embodied by the planters and their authoritarian rules, while also fearing the potential uprising of the disaffected slaves. The twin specters of despotism and anarchy were to haunt him the rest of his life.”

The financial aid of several people, including a wealthy cousin, allowed the 17-year-old to migrate to America in 1772, where he studied Greek and Latin in a NJ prep school, and pursued a degree at King’s College (now Columbia University). “His relentless drive, his wretched feelings of shame and degradation, his precocious self-sufficiency combined to produce a man with an insatiable craving for success.” He used his gift of writing to launch powerful attacks against the oppression of the British Empire and against loyalists.

Entering the military at age 21, he served first as a captain for a NY regiment. But General Washington, observing the young officer’s organizational skills and bravery, took Hamilton on as his aide-de-camp. Hamilton’s gift with words drew him closer to his “taciturn and diffident” commander; Washington relied upon his aide to write his orders and memoranda. In critical situations, Washington entrusted Hamilton with carrying and enforcing commands to leaders in distant locations. If generals were reluctant to follow orders, Hamilton had his commander’s full approval to negotiate—and even to overrule any objections. Unfortunately, Hamilton’s ego led to a temporary separation from Washington, as the younger man’s “outsized pride and quick temper” got him into trouble with many of his superiors. However, Washington and Hamilton did agree on several matters which would eventually affect the government of the new country: the need for a national army, a centralized power over the states, a strong executive, and national unity.

America’s financial difficulties led Hamilton to become obsessed with creating a federal government. The inability or unwillingness of several of the states to properly fund their militias led to mutiny and desertion, leaving Washington’s army continually on the brink of total chaos. Only the power of a centralized governing body could require all states to pull together. Deeply involved in both the Annapolis convention, in which the ideas for the replacement of the weak Articles of Confederation were proposed, and then the actual Constitutional Convention, Hamilton became a fierce advocate for the document which would map out the new government. He published more than half of the now-famous Federalist Papers explaining in great detail the purpose and importance of the key elements of the Constitution.

Hamilton’s early practical experiences in clerking, his education at King’s College, and his work with the military all helped him to gain an extraordinary understanding of the ways in which the new country would be able to survive as a financial entity. He argued that Congress should establish a central bank to boost the confidence of the various states—for lack of confidence was the main cause of inflation. He made his mark in the newly formed federal government, serving as the Secretary of the Treasury. So strong was his understanding of what needed to be done to boost the US economy that he quickly formed several offices under his control—and his number of workers more than doubled the combined numbers in the Secretaries of State and Defense. “He was the clear-eyed apostle of America’s economic future, setting a vision that would ultimately prevail.” This vision included an industrial revolution, expansion of global trade, and the growth of banks and stock exchanges. When revenue was needed to restore public credit, he imposed taxes, including a whiskey tax (an act that led to violent protests).

Chernow points out that Hamilton had a long list of political enemies. Governor George Clinton of New York became a long-time opponent; Clinton opposed the centralization of the government because he believed that New York would have to shoulder more than its fair share of the “national debt.” Hamilton, believing that Clinton was a demagogue, solely interested in maintaining his own powers, strengthened his own opposition to states’ rule. When NY legislators wanted to strip Tories of all property and privileges, Hamilton defended the supporters of the crown in 45 cases relating to the “Trespass Law.” When Hamilton supported the establishment of the Bank of New York, Clinton refused to grant it a charter. Clinton was one of the last hold-outs in the acceptance of the Constitution.

James Madison had collaborated with Hamilton in the writing of the Federalist Papers; however, the two drew apart over a number of issues. Madison was opposed to Hamilton’s proposal that the federal government should pay off each state’s war debts; Madison objected because Virginia would have had to absorb the burden of many of the other states. Also, Madison envisioned an agrarian society, while Hamilton envisioned one which was driven by industry (as exemplified by his plans for Paterson, NJ).

James Monroe had seemed to be supportive of Hamilton even in the darkest of times, when the latter confessed to having an extra-marital affair, which led to his victimization in a blackmail scheme. The information was to be kept confidential, but it was leaked to a gossip-mongering journalist, who turned the affair into a full-blown scandal. Chernow suggests that Hamilton suspected that Monroe was the source of the leak.

According to Chernow, Thomas Jefferson and Hamilton were also rivals. Jefferson favored strong relations with France while Hamilton advocated working with England. Jefferson was apparently jealous that Hamilton was Washington’s “pet” and had more power and influence in the Treasury Department than Jefferson had in the State Department. Jefferson held Madison’s views concerning America’s becoming an agrarian society. Additionally, Hamilton was an avid abolitionist, while Jefferson owned a number of slaves.

Conflicts between Hamilton and John Adams were primarily the results of the similarities of their personalities. Both were hot-headed, unable to muzzle their thoughts. Each took personally any kind of opposition to his thoughts or aspirations. When Adams became president, he angered Hamilton by negotiating with France without consulting his cabinet. Adams pushed Hamilton and his friends aside, destroying Hamilton’s “sense of entitlement,” an insult which Hamilton never forgave. “His vision now appeared to be so steeped in gloom that one wonders how much depression warped his judgment in later years. The ebullient hopefulness of his early days as treasury secretary seemed to be in eclipse.” Hamilton wound up wrecking his own career in trying to wreck Adams’s, “and the Federalist Party would never be resurrected from the ashes.”

Aaron Burr’s career as a soldier, lawyer, and politician paralleled Hamilton’s. They had worked together on many law cases; but their ambitions clashed, and Hamilton viewed Burr as a deceptive opportunist. When several of Burr’s political moves were frustrated, he always blamed Hamilton’s opposition for the failures. Chernow describes examines the events surrounding the infamous duel that claimed Hamilton’s life. “Between Hamilton’s combative psychology and Burr’s need to resolve his political quandary, there was little room for the seconds to hammer out a deal.” Chernow dismisses the arguments that suggest that Hamilton shot wildly because he intended to commit a “disguised suicide.” The author says that his closeness to his family argues against that theory. Hamilton shot into the air; Burr did not. The reasons for the behavior of each remain debatable.

Hamilton’s life was tragically short; he died at the age of 49—tragic because he had so much to give to his country. And tragic because he was mainly responsible for his fall from power and for getting himself into dangerous situations from which he refused to extricate himself. His pride, his temper, and his inability to moderate his expressions all eventually worked against him. His legacy, nonetheless is impressive: his visions of a centralized government, of setting up a financial system, and mapping out an industrialized, progressive society made him one of our great visionaries. Chernow and Lin-Manuel Miranda certainly captured both his greatness and weakness.