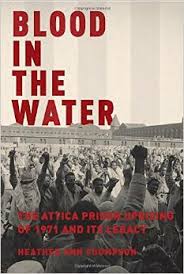 Forty-five years after the bloody retaking of Attica prison by New York State Police and correctional officers, new facts are emerging, though it is clear that many questions are still unanswered. Heather Ann Thompson, a University of Michigan historian, has gathered a vast collection of evidence through interviews, published memoranda, and fortuitous discoveries of mountains of paperwork previously hidden—much to the shame of the state government and law officials. She documents the horrors of the assault, the apparent attempts at covering up, the vengeful behavior of officials, the apparent indifference of officials to the deaths of prisoners and hostages, and the heartless treatment of the kin of the deceased as well as the hostage and inmate survivors. Thompson also describes the legal and administrative obstructions used by the state to prevent full disclosure and to prevent fair allocation of compensation for the victims. Much evidence, now ruled by courts to be “open” for public investigation, has been, at best, heavily redacted, and at worst conveniently made to disappear. But for the courageous persistence of dedicated lawyers, civil rights activists, and journalists, most of the evidence would have been buried forever. Thompson pulls the available material together, shaping it into a fascinating and horrifying, narrative.

In September of 1971, 1,300 inmates of Attica State Prison rioted, protesting inhumane living conditions: poor food, inadequate water supply, excessive work hours for low pay, inadequate medical care, brutal beatings by correctional officers (COs), unwarranted and lengthy solitary confinements, failed promises for meetings to initiate reforms, no religious freedom, particularly for Muslims, and outdated educational opportunities. African-Americans and Hispanics had been marginalized already because of racism before being sent to prison. In the penitentiary, they were treated as sub-humans with no rights.

The prisoners took about 40 hostages: COs and civilian employees. One hostage, a guard was severely beaten, but was released humanely for medical treatment; however, he died from his injuries. Loosely controlled by a small group of natural leaders, the prisoners placed the hostages in a circle in the prison yard, surrounding them for protection against violent inmates. The prisoners attempted to negotiate with the warden and the Commissioner of Prisons; they welcomed outsiders, including New York Times columnist, Tom Wicker, and attorney, William Kunstler. State representatives appeared willing to accept many of the prisoners’ demands, but refused to promise amnesty from criminal prosecution, thus guaranteeing that there would be serious legal reprisals. Standing their ground, the prisoners were unaware of the powerful force that had been assembled to squash the uprising.

National Guardsmen, trained to control riots without using deadly force, were prepared to enter the prison. But the state’s coordinators, with full approval of Governor Rockefeller, had assembled a contingent of nearly 600 state troopers and COs. Ominously, most members of this assembled force were ordered to remove their nametags to avoid identification. Shotguns and heavy caliber rifles were issued, and many in this force brought their own firearms. Contrary to regulations, no one recorded the serial numbers of the weapons or of the individuals bearing them. After days of waiting and being held back by their superiors, the officers appeared to be furious and spoiling for action.

The attack was brutal. After helicopters dropped barrels of tear gas, the troopers and COs rushed into the prison firing their weapons at both prisoners and hostages. Already immobilized and defenseless, 39 men died. Ultimately, the human cost of the retaking was staggeringly high: 128 men were shot, some of them multiple times. Less than half an hour after the action had begun, nine hostages were dead. Twenty-nine prisoners had been fatally shot. Some were killed by scattered buckshot and others killed by unjacketed bullets, which break into pieces upon impact. At least one prisoner was executed, shot in the back of the head at close range.

The brutality continued as the convicts –many with gunshot wounds—were forced to crawl through the bloodied mud. Many were then forced to run naked through a gauntlet of guards and troopers who struck them with their batons while taunting them with racial epithets. Reprisals continued for days as prisoners were beaten, tortured, denied medical attention, and locked in solitary confinement for long periods of time.

News of the uprising and retaking was controlled by the state government. As far as the public knew, the dead hostages had all had their throats slit by the inmates, thus supposedly justifying the ensuing carnage. A long-term cover-up began as morticians were pressured into falsely describing the nature of the wounds. But one medical examiner refused to succumb to pressure from as high up as the Governor’s office; the deaths, he swore, were the results of gunshots.

A major portion the Thompson’s book documents the ceaseless efforts of the legal system to manipulate the entire history of the case: finding scapegoats for the death of the fatally beaten CO; restricting communications between prisoners and their defense teams; indicting 62 prisoners—but no state officers or COs; bribing cooperative prisoners (who were willing to accuse fellow inmates) with promises of lighter sentences, early release, or better conditions. Testimonies from grand jury cases disappeared conveniently or were heavily redacted when evidence pointed to the abuse of power. Malcolm Bell, an assistant district attorney, was instrumental in turning public perception of the long-drawn-out Attica trials. He exposed a conspiracy in which the Governor’s office’s controlled the investigators. The state had continued to demonize the prisoners and lionize their attackers.

After the culpability of the law enforcers was established, several victimized prisoners and the families of those killed sought restitution through the courts. The state managed to drag out many of the proceedings, and when a lump sum was finally awarded, more time was wasted in the determination of who would receive what entitlements. And the payments were slow in coming. It took 20 years for the prisoners’ cases to be settled. The survivors of the hostages killed were in for special mistreatment by the state. Most of the relatives of the slain had accepted checks for workman’s compensation; sadly, this was an administrative trick to prevent the families from ever suing the state. It took 30 years for the state to settle with these collateral victims.

If the history of Attica’s uprising, retaking, and the grim aftermath were an isolated moment in our corrections system, it would be horrible enough. But with the word “legacy” in her title, Thompson warns that the issues of Attica live on. Mass incarceration has grown enormously, mainly due to mandatory draconian sentences. The alleged use of excessive force by authorities appears to be ever-present. The marginalization of minorities is evidenced in housing laws, voting laws, and health coverage. The dehumanization of convicts speaks for itself; as they emerge from prison, many have been offered no rehabilitation or job-training, and have been denied many of the rights of citizenship. What they have experienced in prison are harsh, nightmarish living conditions. The judicial systems appears to deal with minorities and the impoverished unequally. Unfortunately, the spirit of Attica is alive and well.