Oakland, N.J., July 20, 2016 – Paterson animal control responded to complaints from neighbors of an emaciated puppy with strong odor being kept outdoors in the heat with no food or water. Being an inner city animal control, they often went on calls like this, but no one was prepared for what they found. A skeleton of a puppy wagged his emaciated body as they approached. He then collapsed from the exertion and excitement of greeting a visitor, having been alone for days.

The officer took him off his chain and brought him into the home, where he staggered over to the toilet and drank all the water out of it before she could stop him. Infected skin flaked from his body as he continued to wag his tail falling over because he was so dehydrated and starved. He had an extremely strong odor from his skin infection and the feces and urine he was living in. The owners admitted that he hadn’t eaten in days.

RBARI rescuers raced to meet animal control and get the puppy immediate medical care. The puppy’s tail never stopped wagging – he was so excited to finally have human contact and kind touch. The rescuers took him into their arms in a big fluffy towel because he was so frail. The towel seemed to weigh more than his tiny body. This happy, dying puppy quickly found his name – Pax – meaning peace because he had finally found his peace after being kept alone with no food or water.

RBARI rescuers rushed Pax to Oradell Animal Hospital and he never stopped kissing them. When they arrived and unwrapped him from the towel, he began wiggling again. He was so happy, his tail wagging furiously – all the while the rescuers were in tears as he tipped over again and again from weakness, his little heartbeat seemed to shine right through his paper-thin skin. That little heart seems to be what got him through so many long days and even longer nights.

Pax will be hospitalized and on IV fluids and antibiotics with 24 hour care until he is stabilized. Food will need to be slowly reintroduced to his body. He is getting an immediate bath and skin treatment. Pax is finally at peace, and we can’t wait to give him all of the attention, love and care that he has so desperately been craving. You can help Pax by making a donation to the Betty Lou Fund to help us to help him and so many others in desperate need.

You can donate by going to www.rbari.org/donate/betty-lou-fund 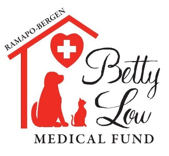 Ramapo Bergen Animal Refuge, Inc. is a 501 (c) (3) non-profit serving all of Northern New Jersey. It is the leading no-kill animal shelter in Bergen County whose primary mission is to SAVE MORE LIVES. Ramapo-Bergen Animal Refuge, Inc. is founded on the belief that all animals have a natural right to humane treatment including proper care and safe shelter. Please help us save more lives today.