Home » Local Events » The Autobiography of Mark Twain: The Complete and Authoritative Edition 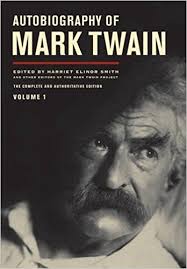 The final volume of Twain’s “complete and authoritative” autobiography concludes the compilation of the author’s dictations, which are documented, expanded, and illuminated by the exceptional editorial team led by Griffin and Smith. This volume is divided into three sections. The first section is set basically the same as those in volumes one and two: recordings of dictations resembling stream-of- consciousness narratives with only an occasional sense of chronological sequence. The second section is a previously unpublished manuscript detailing his animosity toward his housekeeper and business manager, who, he claims colluded to cheat both Twain and his heirs. There is none of his sarcastic wit or his sardonic commentary in this section; Twain’s vitriol permeates this indictment of these people whom he believed to have betrayed his trust. The third section contains extensive notes by the editorial team, expanding upon the dictations; providing supporting details from letters, essays, and speeches spoken by Twain or alluding to the author; filling in biographical information relating to his contemporaries or details of significant events; cross-referencing materials included in Volumes 1, 2, and other Twain works; and fact-checking his recollections.

At times, Twain’s commentaries appear to be misanthropic. He claims that he doesn’t need to read philosophy, for he has “…gone to the fountain-head for information—the human race. Every man is in his own person the whole human race…I am the whole human race without detail lacking…what a coward every man is! And how surely he will find it out if he would just let other people alone and sit down and examine himself. The human race is a race of cowards; and I am not only marching in the procession but carrying a banner.” He speaks of his dislike for both religion and politics: “I am quite sure…that in [these] matters … a man’s reasoning powers are not above a monkey’s…. In religion and politics people’s beliefs and convictions are in almost every case gotten at second hand, and without examination, from authorities who have not themselves examined the questions at second-hand for the examiners, whose opinions about them are not worth a brass farthing.”

Twain’s attacks on individuals can be brutal. He has no use for President Theodore Roosevelt, whom he attacks in several of his dictations as being all show and bullying. Twain accuses TR of buying his election using corporate sponsors. The President had lashed out “venomously” against a naturalist who had attacked TR for the “promiscuous slaughtering of animals.” Twain reproaches TR for being “unpresidential” in his attack upon a private citizen. Twain is enraged by the President’s inviting Booker T. Washington to the White House for dinner—an empty “gesture” which the author dismisses as a weak effort to show non-bias; on the other hand, TR had peremptorily dismissed an entire command of Negro soldiers who had been assigned to Brownsville, TX. When former President Grover Cleveland died, Twain found the contrast between the two executives to be extraordinary: “It is the contrast between an archangel and the missing link.” In short, Twain believes that Roosevelt is the “worst disaster next to the Civil War.”

Twain also targets Andrew Carnegie frequently. The author calls the philanthropist “The Human Being Unconcealed” who tries to conceal what he is, but fails. Twain observes that Carnegie can talk only about himself, holding audiences spellbound, recalling “The Ancient Mariner all over again.” Twain believes that Carnegie gives away money to purchase fame. He finds Carnegie to be “…an astonishing man in his genuine modesty as regards the large things he has done, and in his juvenile delight in trivialities that feed his vanity.”

Many commentators have spoken of Twain’s propensity for having young female acquaintances as companions. Having lost both his wife and a daughter, and having a second daughter suffering dangerous epileptic seizures, and a third daughter deeply committed to a singing career, Twain longs for grandchildren to accompany him on trips or to visit with him at his home. He calls 10 of these young acquaintances his “angel fish” within his “Aquarium.”

He recounts several special events in England, where he was warmly received. Oxford University conferred upon him the honorary degree of Doctor of Letters. Though honored, Twain still managed to find reason to complain; America had given thousands of honorary degrees, but had basically ignored him. He was finally able to “…purge myself of this thirty-five years’ accumulation of bile and injured pride.” He was overwhelmed by an Oxford pageant in which many historical re-enactments were paraded before the audience. He had eventually grown so used to the “obliterated ages and their best known people that if I had met Adam, I should not have been either surprised or embarrassed; and if he had come in a racing automobile and a cloud of dust, with nothing on but his fig-leaf, it would have seemed to me all right and harmonious.”

A renowned tale-teller, Twain inserts a number of humorous stories. He recounts how his friend, Robert Collier, conspired with the satirist in hoodwinking Twain’s housekeeper, Mrs. Lyon. Collier announced that he was sending a baby elephant to Twain’s estate; he then sent provender for the beast a few days before its supposed arrival. The elephant finally arrived—stuffed, two-feet long, and on wheels. Twain also tells of “Wapping Alice,” a man disguised as a female servant, and the complications that arose in the arrangements for his/her marriage.

In the second division of the autobiography, the editors present the previously unpublished “Ashcroft-Lyon Manuscript.” Readers, accustomed to Twain’s sarcastic, and often sardonic attacks on individuals and institutions, will find this manuscript to be uncharacteristic of his style. From beginning to end, this piece is a series of vicious attacks upon people whom he believes betrayed him. He accuses Isabel Lyon, his secretary, housekeeper, and companion since 1902 (through 1909) and Ralph Ashcroft, his business manager since 1907, of plotting to steal from him and his heirs, of separating him from his daughter, Jean, and of plotting to take control of his estate, including his copyrights. He claims that they are “…a pair of degraded and sufficiently clumsy sharpers, and I the born ass, their easy victim.” Twain’s attacks appear to be rather heavy-handed with more sound and fury than factual evidence. His having written the manuscript may well have been primarily designed to protect his daughter, Clara, sole-survivor of his immediate family, from any deceitful money-grabbers seeking a portion of his estate or access to his publishing royalties.

As in the first two volumes, the editors’ notes are a treasury of details about Twain’s experiences, his family and friends. The notes expand upon his recollections of events, providing more detail and background.

The three-volume authoritative autobiography is the product of a three-year series of dictated recollections, put together as they occurred to him—ideas that he believed worth preserving; but he lacked the patience (or time, as he was not healthy) to give more traditional organization. Each episode appears to be well thought out, and with the editors’ expansions, helps to give a detailed portrait of one of America’s greatest writers.