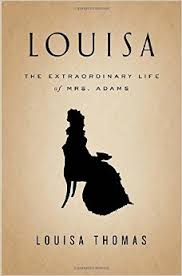 The history of Louisa Catherine Adams has been hidden in the shadows of the lives of her husband, John Quincy Adams, and her in-laws, John and Abigail Adams. Author Louise Thomas has pieced together a comprehensive narrative of the first lady’s life using Louisa’s correspondence, journals, diaries, and three unpublished memoirs. The portrait that emerges is rich in depth and complexity: revelations of a challenging marriage in which the partners have differing needs, objectives, and behavior; recurring tragic loss ; continuous social demands upon the wife of a diplomat/politician; the frequent reminder of a society’s dim view of a woman’s intellectual capacities and of her subservient position; the torments of recognizing the evils of slavery—yet fearing the outcomes of emancipation; a fragile constitution, with a history of long illnesses, fainting, debilitating headaches, and depression.

John Quincy was nearly all business: his priority was always serving his country; Louisa and family were clearly relegated to a secondary level; it’s not that she hadn’t received a fair warning; John Quincy, after proposing marriage to her, headed off alone on a long assignment, leaving her to wonder for months if he was still interested in her. Later, he had refused to allow two of their three sons to accompany them on the long-term diplomatic mission to Russia that lasted several years. He abruptly abandoned her in Moscow as he rushed to participate in the treaty of Ghent, later insisting that she find her way to France. His focus upon service in his assignments in Holland, France, England, Germany, and Russia was exemplary—and perhaps indicative of his political ambitions to live up to his parents’ expectations. However, his wife and children were not his primary concerns.

Her husband’s obsession with his work combined with his condescension concerning Louisa’s understanding of political issues led to harsh exchanges, which did little to enhance her self-image. John Quincy’s abruptness, his short temper, and social ineptness probably would have kept Louisa under wraps; however, the kindness of noble women in Prussian and Russian courts helped her to emerge as a socially active, attractive, well-respected figure. The Prussian king and the Russian czar both complimented her for her exceptional dancing and manners. Her triumphs in society actually helped her husband gain access to inner circles which might have excluded him because of his ungracious behavior. While her successes in ballrooms and salons enhanced her self-image, her greatest boost came from her amazing trip from Russia to France at the end of the Napoleonic war. She traveled for thousands of miles with her young son and a small group of guards. The dangerous journey carried her over frozen or muddy terrain, through battlefields that were still strewn with corpses, and into the midst of an angry, undisciplined French army (riding in a Russian coach didn’t help her cause). Her growing confidence and her delight in being respected in social circles made her the perfect partner for the reticent John Quincy, who aspired to work his way to the presidency. When President James Monroe named her husband Secretary of State, Louisa enthusiastically took over the role of hostess for the elite. The dinners, parties, and balls which she hosted helped John Quincy’s popularity soar, so that his election became predictable.

While Adams’ winning the presidential election of 1824 seemed to fulfill his and Louisa’s ambitions, the President and the First Lady received constant vicious criticism from political opponents. Louisa’s political opinions were rebuffed or ignored simply because she was a woman; the joy and excitement of hosting parties waned as etiquette demanded that the First Lady be restrained and “dignified,” e.g., not gossiping or voicing her opinions. John Quincy’s adamant opposition to slavery made both of them targets of angry slave-owning politicians from both the South and the North.

The 1828 presidential campaign, won by Andrew Jackson, released Louisa from what she viewed as a prison-like existence which had frequently forced her to withdraw, claiming illness. However, there was little respite in leaving the White House, as Jackson blamed her for his wife’s death.

Fragile health had long been a problem for Louisa. Fevers, headaches, and fainting spells often left her weakened—doctors often resorted to blood-letting and leeches as remedies, leaving her weaker. She suffered several miscarriages, some apparently brought on by long voyages which she was forced to take as a diplomat’s spouse—though she was prone to violent vertigo and seasickness. With her long history of illness, it is no wonder that she was also prone to depression, especially when John Quincy felt obligated to be on-the-job rather than at her side. Personal tragedies worsened her melancholy: the deaths of Abigail and John Adams, who had become advisors and confidantes; the premature deaths of her two oldest sons (her only daughter had died in infancy); and the death of her beloved father and sister.

Despite the tragedies and disappointments, Louisa Adams emerged as a bright, strong-willed, well- read woman, gifted in expressing herself, especially in journals, letters, memoirs, and even in poetry and drama. She struggled to assert that women were as intellectually capable as men—that they had the right to voice their opinions at all levels of the society, including politics. Though she didn’t quite reach the intensity of a suffragette, she was definitely an early voice for women’s rights. She also supported her husband’s valiant efforts to abolish slavery, especially when he returned to Washington as a congressman. She feared that civil war was inevitable. The harsh treatment that John Quincy received in Congress—including votes for censure– made the Adams’ world tenser, as he became even more adamant and obstinate. When John Quincy collapsed and was clearly dying in Congress, the representatives refused to let Louisa go to her husband’s side. That was no place for the “weaker” sex.

Thomas’ handling of Louisa Adams’ papers deftly creates a portrait of a fascinating woman who achieved great things in a society and political world which held that women were intellectually deficient and therefore incapable of serving in any political situation. She was a feisty, strong-willed wife, and a devoted mother, daughter, and daughter-in-law. As she nurtured her own self-confidence, she emerged as a woman who foresaw that women deserved to be treated as equals in every respect.