It’s the responsibility of adult to help kids navigate the world – online and offline.

Kids can also be teachers, and October might be a good month to have your kids teach you something about the Internet – and how not to get scammed. 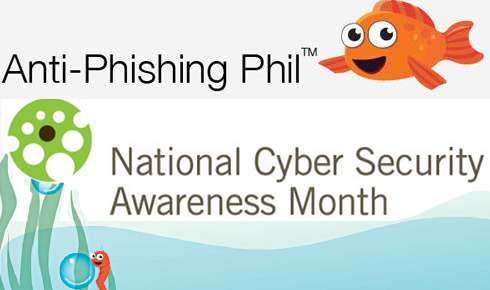 This past August 2014, the anti-virus company McAfee conducted a test where 79% of business users –failed to detect scams on the McAfee Phishing Quiz.

Phishing scams continue to be the greatest threat to: scam money, steal data, ransom files, or propagate viruses…and the game Anti-Phishing Phil is a great way for kids to learn the dangers, and then teach their gullible parents.
http://www.ucl.ac.uk/cert/antiphishing/

There are many scams that seem so obvious it’s surprising people fall for them, but that does not mean the scammers are stupid – they are just being efficient. A scammer using a large net is not interested in wasting time on targets that offer little chance of success; so, often a poorly written or executed phishing scam is done on purpose so that a soft target exposes themselves.

At the same time, phishing scams are also getting much more sophisticated, as well as being socially engineered. The latest leak of nude celebrity photos most likely resulted from a phishing email where the targets made themselves vulnerable.
Phishing scams are limited only by the imagination, and recent emails have impersonated EZ-Pass, E-Bay, numerous banks and financial institutions, service providers, and the list goes on and on.

McAfee, their August report estimates that the growth of malware is about 700,000 a quarter, and in the last year they have compiled a list of about one million phishing urls. Even though the McAfee sells anti-virus, they know an educated user is the best defense against malware, scams, and viruses.

October is National Cyber Security Awareness Month, and cyber security is a national security issue as hostile governments and terrorists seek to do damage to both America’s economic infrastructure and physical infrastructure.

Anti-Phishing Phil is a fun game for children ages 8 to 89 or older – play it with the family, play it by yourself, buy play it before someone plays you