During the December 7 council meeting a new plan for a redesign of Bush Plaza, which hopes to kick-start a long awaited downtown beautification venture was co-presented by the Community of Commerce and the Oakland Recreation Commission. 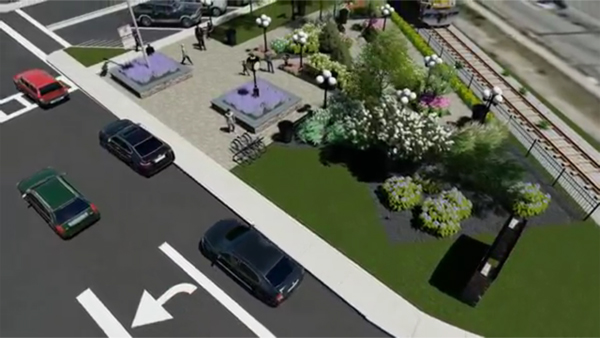 The chairmen of both organizations, Peter Kikot of the Community of Commerce and Mike Guadagnino of the Recreation Commission made the presentation. The main focus of the plan is to create a pedestrian park that ties historic Oakland with the Oakland of today and tomorrow. The centerpiece of the idea is to build a seating area on the actual footprint of the old Oakland Rail Station. With the help of old photos Peter was able to ascertain the location of the rail station. The park will also remove the old asphalt located in Bush Plaza and replace it with pavers, grass and create a new designated parking area for those wishing to visit either Bush Plaza or the area to be called Station Park. 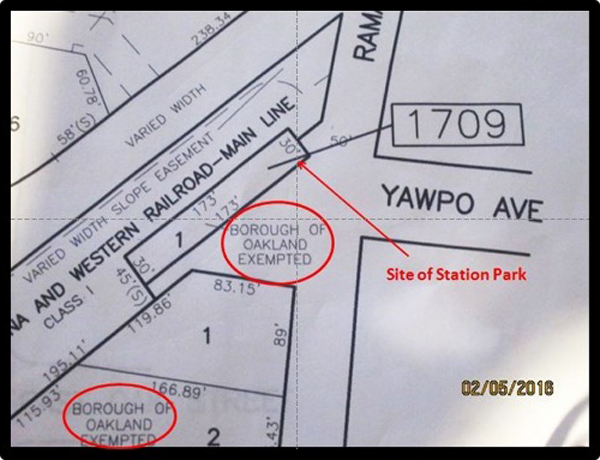 Included in the plans are an electronic message board, which would sit at the corner of RVR and West Oakland Avenue. The board will be a wireless operated sign where all information pertinent to local residents can be updated and controlled from borough hall, while the sign rests in a centrally located spot for all to see. Historic style period lighting is also planned along with early 1900 style benches which continues to merge the past with the present. A four-sided clock, decorative safety fence located along the rail property line and a new flagpole are also planned keeping with the proposed beauty and historic charm. Peter a landscape designer by trade created the architectural drawings of the park.

The big question is the cost for such a venture. They estimated the final bill to be around $275K. One thing both Mike and Peter stressed during the entire presentation is that they plan to build the park without asking the Oakland taxpayers for any money. The two talked about grants, fundraisers and donated labor to help build and construct the new park in a very similar way that Great Oak Park has been developing, how the recreation complex improvements have been paid and the way Stewart’s Woods was created. The borough council members in attendance unanimously endorsed the idea as it now moves onto the next phase of being examined by the borough engineers.

Both Peter and Mike added that this entire idea was brought to them and kicked off by local historian Kevin Heffernan. Mike spoke about his meeting with Kevin back in February of 2016 and the subsequent meetings they enjoyed. He also talked about how Kevin did a lot of the legwork and presented the plan at the September Recreation Commission meeting. Mike stated, “He gives Kevin all the credit for the genesis of Station Park”.

At the end of the meeting was a professional video presentation sponsored by the Community of Commerce (see below). The video was the caveat of how the park may look. Continue to follow the updates on the new downtown beautification project as Oakland residents begin to work on Station Park.