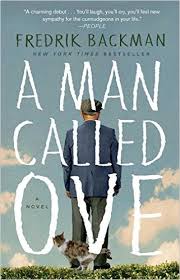 To most observers, Ove, the protagonist in Fredrick Backman’s novel, was a sarcastic, bullying, loud-mouthed boor—the community curmudgeon. He was grumpy because “people never gave him reason to see it another way.” He seemed to be obsessed with identifying “idiots” everywhere. The narrator explains, in part, Ove’s anti-social behavior. The main character was “…caught in the wrong time” in an era of advanced technology, maddening bureaucracy, and crass commercialism, and moral indifference. Ove required simple things: “…a roof, a quiet street, the right make of car, and a woman to be faithful to.” He wanted a “job where you had function” and a house “where you can tinker with broken things.” And beneath the rough, stand-offish exterior, Ove possessed a charitable heart, one that often compelled him (in spite of both the society and himself) to assist those in need.

The narrator directs the reader through decades of Ove’s life, revealing his dislike for the “white shirts,” the representatives of local bureaucracy, dating back to when “the system” had destroyed his family home, allowing it and a neighbor’s home to burn to the ground, and forbidding firefighters to extinguish the flames. The officials had been trying to evict Ove and the neighbors, but meeting resistance, resorted to arson. Despite his personal despair, Ove raced into the fire to rescue the neighbors. The narrator observes that “…most men run away from an Inferno. But men like Ove run into it.” When Ove’s wife, Sonja, had been partially paralyzed in a horrific bus crash, Ove fought the white shirts— bus officials, insurance representatives, and the local council, who wanted to put her in a nursing home, claiming that she couldn’t care for herself. Refusing to have her institutionalized, Ove rebuilt the interior of their home, lowering all necessary utilities and furniture so that she could operate everything from her wheelchair. Ove’s friend, Rune, having suffered a stroke, was being forcibly moved by white shirts (against his wife’s wishes) to a nursing home. Ove enlisted the aid of a journalist, who uncovered shady dealings between the home and the council’s bureaucrats. Basically, Ove blackmailed the white shirts and rescued Rune so that he could be looked after by his truly caring neighbors.

Even after her death, Sonja, Ove’s wife, influenced his life. He had “…never lived before he met her. And not after either.” He always saw the world in black and white; she saw it in color; and “she was all the color he had.” She was very bright, reading constantly. She was generous, always reaching out to others even after having suffered a painful injury and having lost a pregnancy. She was persistent, refusing to “let darkness win,” even though she had been paralyzed. Instead, she prepared herself to teach special needs students, particularly those with ADHD, youngsters whom the teachers couldn’t handle. Ove fought alongside her “Because that was the only thing in this world he really knew.” His attachment to her continued after her death, as he frequently went to her gravesite, leaving the flowers that she had loved, tell “her” of the daily violations of the neighborhood’s ordinances, and promising that he would join her soon. He attempted suicide four times—each attempt failing because of his bungling or an interruption. In each case, he wound up assisting –even if reluctantly— those who had interrupted him.

What Ove needed most was “Having things the same as usual.” He believed that people needed a function. “And he has always been functional, no one can take that away from him.” When he was laid off from his job, he became the self-appointed enforcer of neighborhood regulations: chasing vehicles from prohibited areas, checking the locks of garages and storage areas; chastening pet owners whose animals weren’t properly curbed; locking up a bicycle that wasn’t stored properly.

Most people were intimidated by Ove’s rants. But not Parvaneh, a pregnant Iranian mother, who was new to the neighborhood. She saw the sadness and need behind Ove’s gruff exterior and employed many methods to help him focus upon others—to pull him away from his inner suffering. She convinced him to care for a mangy, nearly frozen cat because she knew that he needed something to care for. Parvaneh helped to build a relationship between her two young daughters and Ove. Eventually, the children drew pictures of him—and called him “Grandpa.” Parvaneh would shout him down when he became impossibly obnoxious, and basically bullied him into assisting her after her clumsy husband had been hospitalized. She further connected with Ove (and kept an eye on him) by asking for driving lessons. While the lessons proved contentious, the two characters grew closer. After Ove had refused to speak with a journalist, who was trying to write about his heroic rescue of an ill person at the railroad station, Parvaneh made sure that the writer received background information for her story. Parvaneh saw Ove’s kindness; she laughed when, after he had a serious coronary episode, he learned that his heart was too big. She teased him for being bad at dying, though she already knew that his spirit was too big for this world. She had seen his kindness to Mirsad, a gay boy who had been rejected by his father; she witnessed his fight to help Anita, Rune’s wife, defeat the white shirts. She knew of Ove’s helping young Adrian fix a bicycle for a girlfriend.

Ove would have hated his funeral. All that he wanted was to be dropped in the ground next to Sonja. But more than 300 people gathered to pay respects, because they had been touched by the caring, generous heart of a basically simple man whose rough exterior couldn’t disguise his goodness.