Home » Local Events » In the Midst of Winter: A Novel

Isabel Allende. In the Midst of Winter: A Novel.
New York: Atria Books, 2017.
As reviewed by Ted Odenwald 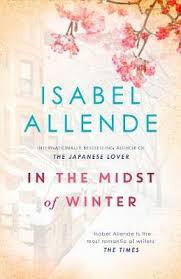 Isabel Allende’s novel has the makings of a mystery: a young woman’s frozen body is discovered in the trunk of a car driven by an illegal, unlicensed alien, who is working as a nanny for a gangster. She protests her innocence to two sympathetic educators, who convince her to dispose of the body and the car not just because the circumstantial evidence would point to the alien, but also because of her mortal fear of the ferocious temper of her boss. While the plot focuses upon these characters’ bumbling efforts to dispose of the evidence, the author is looking at their characters very closely. All three– a reclusive landlord, a stoic refugee from Chile, and the panicky illegal alien from Guatemala, —have deep traumatic scars caused by horrific events in their pasts. Allende analyzes the behavior of each character compassionately, eventually revealing how all have actually been strengthened by the bizarre event that brought them together.

A blizzard and a minor auto accident draw the three characters together. The landlord, Richard Barmaster, a professor of Latin American and Caribbean history, makes an emergency run with his sick cat in a major snowstorm. He bumps into the tail end of a Lexus, driven by Evelyn Ortega, a small Mayan woman. Although the damage is minor, the young woman panics, speeding off hysterically after taking Richard’s insurance information. Later that evening, she shows up at his home unexpectedly. He asks his tenant, Lucia Maraz, to assist him by serving as a translator. The three huddle together for warmth in Richard’s apartment, and eventually Evelyn reveals that she has discovered a woman’s body in the trunk of the Lexus. Richard and Lucia, the tenant, determine to help Evelyn by disposing of the body and car in a remote area of upstate New York.

Their journey in the early morning in hazardous conditions is filled with interesting challenges. Obviously, they must drive two cars: the gangster’s Lexus and Richard’s Subaru. Richard, fearing that they may be stopped by police, makes sure that Evelyn trails at a good distance behind him. He has chosen the Lexus because he believes that he would stand a better chance of talking his way out of trouble than Evelyn would; her status as an illegal immigrant would give her little chance of escape. Richard, fearing (he’s always worrying about something) that Kathryn’s body will thaw out, drives without the heater. He is bundled up heavily and will certainly attract attention if people see his imitation of a child in a snowsuit. They have two encounters with the police: the first is a roadblock because of a multi-vehicle accident; the second is a traffic stop because one of the Lexus’ tail lights is broken. Richard breaks the tension when he vomits on the officer’s boots, earning him a warning and a quick dismissal.

Richard’s delicate digestive system causes problems later in the cabin when he has a disastrous reaction to Chinese food. When the air clears, he attempts to leave the cabin, only to encounter a moose trying to enter. Richard finally maneuvers the Lexus to a cliff; his plan is to push the car into the deep lake below the cliff. Nothing is easy for Richard as the car hangs on the cliff’s ledge for a long time before plunging into the water.

The disposal of the body is even more complicated. Because Kathryn and Evelyn believe that the souls of bodies not at rest are doomed to roam the earth forever, both insist that Kathryn’s body be placed somewhere that it will receive proper obsequies. The trio drive to the grounds of a spiritual retreat in a remote area known to Lucia; there Evelyn is led by a vision to the “proper place.”

Allende has all three of these characters reveal the traumatizing events that have scarred and haunted them for years. Their stories are all filled with details that have shaped their personalities, and have affected how they have been hampered in developing long-lasting relationships. Lucia, now 62-years-old, had been caught in her youth in the political upheaval in Chile, in which President Salvador Allende was deposed by a military junta. Lucia’s brother, Enrique, was fascinated with Che Guevara’s history and writings. Establishing martial law, General Augusto Pinochet sought out all possible opponents. Enrique, who was known for his “incendiary diatribes,” and was suspected as being a guerilla fighter, was blacklisted and ordered to turn himself in to the authorities. He became one of the thousands of disappearing dissenters—probably tortured and murdered. Lucia, who was labelled as a “sympathizer,” was assisted by the area’s Cardinal, who arranged for her asylum at the Venezuelan embassy. From there she emigrated to Canada, where she learned English, studied, journalism, and did investigative reporting for political magazines and television programs. In correspondence, her mother said that Lucia would always have difficulties forming lasting love attachments because “the lack of a father [her father had been a bigamist] leaves a hole in a woman’s heart….” “A girl needs to feel protected; she needs masculine energy to develop trust in men and later to be able to give herself in love.” She returned to Chile after 17 years of exile, and married a father figure who was basically indifferent to her—abandoning her when she developed breast cancer.

From one terrible moment, Richard “…had become so careful and had taken so many precautions that he often felt he went through life walking on eggshells. “ His friend, Horacio, had “accused Richard of spending his life talking to himself, muttering, remembering, repeating, planning. He said that only human beings were so focused on themselves, slaves to their egos, navel –gazing, on the defensive even though no danger threatened them.” Working on a doctoral thesis in Brazil (1985-1987), he had embraced the seductive life of alcohol, drugs, and sex. He married a beautiful dance instructor, but that marriage became troubled when his wife, Anita, became deeply depressed after losing an infant to SID. Richard was more shaken by his wife’s reaction than he was by the death itself. He abused alcohol and drugs—leading to a horrific accident, in which he accidentally killed Bibi, his loving three-year-old daughter. As Anita fell deeper into depression, he accepted a teaching position in the states, dragged Anita along with him, and sought psychological counseling for her in New York. But nothing helped; Anita committed suicide, and Richard now lives in a world of guilt which he has built for himself.

Evelyn, decades younger than Richard or Lucia, has her own disastrous history. She and her two brothers had been abandoned by their parents, who left Guatemala, “the Garden of Eden blessed by God but mistreated by humanity.” Her brother, Gregorio, after several scrapes with the police, joined the vicious gang, MS13, where he took a blood oath requiring loyalty to comrades above all else. He apparently broke the “code,” and wound up hanging from a bridge with his throat cut. MS13 continued its vendetta by cutting the younger brother’s throat and by breaking Evelyn’s arm, dislocating her shoulder, and raping her. Traumatized, she was unable to speak without a severe stammer, and she became nearly catatonic. A shaman gave her a necklace with the image of a jaguar, so that the young woman would be protected by the “Sacred Mother of the Mayas and the sacred mother of all Christians.” Allende provides a detailed account of Evelyn’s escape from her country, led by a “coyote,” refugee smuggler, who took her through the dangerous parts of Mexico. He handed her over to “The Expert,” who helped her across the American border, and told her to surrender to the border police; the journey had weakened her, and she would not survive long in the desert. After she was apprehended, she was able to contact her mother, who then moved her to Chicago; but Evelyn was threatened with deportation when her stepsister’s involvement with drugs brought the illegal immigrant’s status to the attention of INS. Gangster Frank Leroy was able to gain control of her, give her a fake identity, and then basically enslave her as a caregiver for his physically challenged son. The auto accident, and the discovery of Kathryn’s body are just more disasters heaped on this poor soul.

The disposal of the evidence of the murder becomes an adventure of healing for all three characters. Richard is finally able to change his pathetic world of self-pity and guilt by helping someone who has experienced incredible horrors; he also understands that he can end his loneliness as he warms up to the affections of Lucia. Lucia, who has felt condemned to be a lonely old woman, embraces the opportunity to live her life to the fullest, even though she had suffered various losses in her youth. “The trauma of [Evelyn’s} rape was seared in her memory and body. She associated physical contact with violence, blood, and above all with her brother …and his slit throat.” But the caring attention of two fellow struggling souls helps to bring her back safely to a place where she feel secure.