Home » OtherNews » An Ode to Our Doty Road Bridge

An Ode to Our Doty Road Bridge
By Kevin Heffernan

The current Doty Road Bridge has no soul and offers nothing to augment our wonderful memories. Made of the latest technology of steel girders wrapped in concrete, it is unable to recall Oakland’s glory days or even to inspire new ones. So sad.

Is there a person among us that doesn’t have a fuzzy warm memory of the Doty Road Bridge? Is it just crossing it a thousand times? Or walking astride its beams to Pleasureland? Or perhaps it’s having a beer or two or three at the Pleasureland Pub, Auggie’s or Angie’s to some, at the foot of the bridge. Lee Eramo-Mouacdie remembers calling it Thunder Bridge because of the sound of the car tires on the wood planks. Or it could even be the amusement of a one lane bridge in the 20th Century taken to get you to Pompton Lakes for a movie. 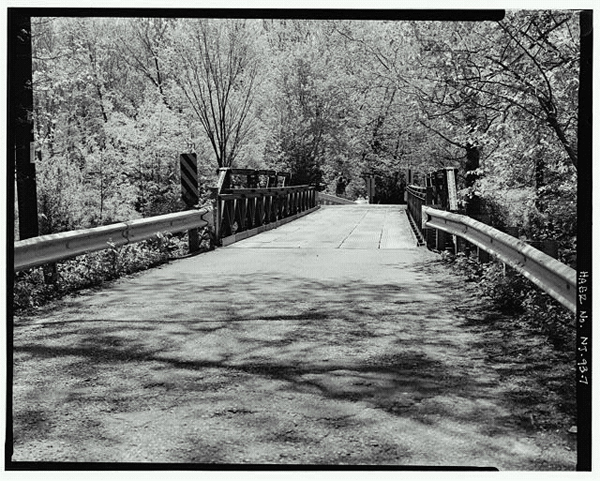 Yes, I refer OUR Doty Road Bridge, that creaky, shaky iron assembly that crossed Oakland’s Moon River and transported us to other wonderful worlds while keeping us safe from the waters below for almost 100 years. Or, well, almost safe for most.

Walk with me here back in time and I share with you the history and fate of our storied Doty Bridge, when it came to Oakland, why it came, where it came from and finally, where it went and why.

The year was 1891 when our Doty Road bridge was built and opened with great fanfare. Oakland was then part of Franklin Township. The Freeholder Committee members associated with the bridge were D.H. Spear, J.F. Cruse and A. Bogert. 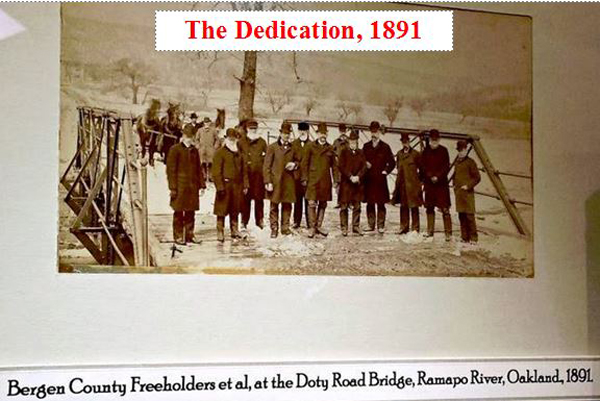 But first, a couple of questions: Why was a bridge across the Ramapo built in the first place? And was our beloved Doty Road Bridge the first in that location?

The precise answer to the first is lost in history at least to this reporter. Perhaps Bergen County had an excess inventory of bridges at the time and not enough rivers to cross. Or perhaps the politicians and administrators in Hackensack and Franklin Township were true visionaries preparing for 50 or 75 years into the future. Nah.

But I digress. As to if our Doty Bridge was the original bridge, the answer is no, it was not. What?!?!

An 1876 map of the Oakland section of Franklin Township clearly shows a bridge across the Ramapo at the precise location of our Doty Bridge, 15 years before our beloved bridge was built. It also shows Aaron Doty owning a property on the Eastern side of the Ramapo on Terhune Ave roughly where the entrance to Shop Rite is situated today but none on the Western side of the river. That property was owned by Samuel Demarest as was much property on the Eastern side of the river. But, the 1902 map of Oakland shows Mr. Doty owning 2 farms on the West side of the Ramapo River. There was also the Post farm on the Western side at the time. That was it…..3 small farms. And there was no bridge over the Ramapo in Oakland detailed in maps dated 1861 or 1872 other than the RR trestle. Hence the original Doty Road Bridge was built between 1872 and 1876 when it first appeared on the map. 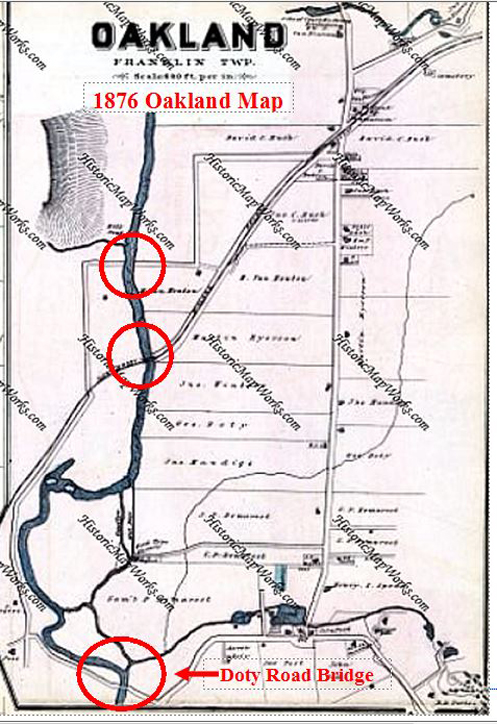 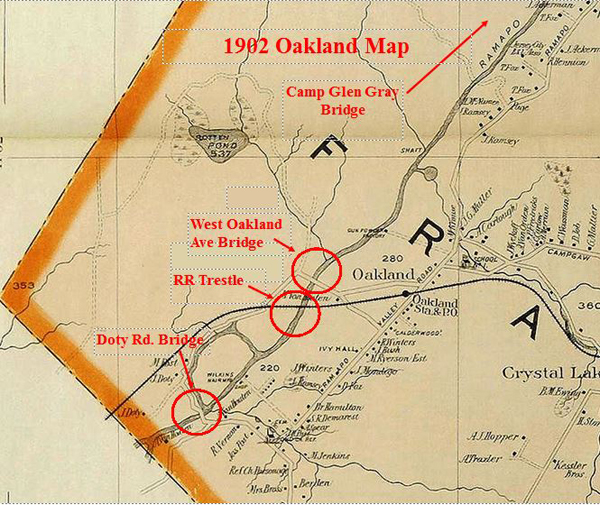 Interestingly, Doty Road, a cow path whose first name was Willow Street, then extended to what is a small portion of West Oakland Avenue today. After crossing, one then had to make a right turn and proceed back to West Oakland Avenue and its bridge. In 1876 there was no left turn although by 1902 a left turn would place one on a dirt trail. It would be another 55 years in 1946 before West Oakland Avenue was paved and extended into Pompton Lakes. To make things even more interesting, the West Oakland Avenue Bridge went no place either in 1876 or in 1902. It connected only to the Doty Road Bridge since there were neither houses nor farms listed on the other side of the river. Additionally, Skyline Drive wasn’t even a dirt trail in 1876 but became one by 1902 and ended at Rotten Pond. 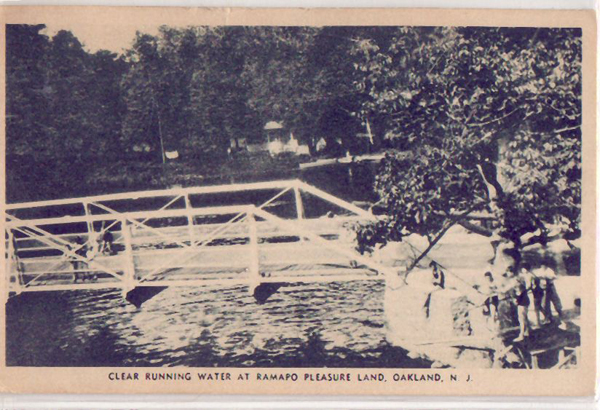 Still, on one hand we have then 2 bridges to nowhere but on the other hand we have Mr. Demarest, a powerful person very well known to and connected in Franklin Township and Hackensack. He owned large properties on both sides of the river when Franklin Township was responsible for building and maintaining its own bridges. Hmmmm.

So, the Doty Road Bridge and the West Oakland Ave Bridge formed a closed loop with RVR in both 1876 and 1902. It must be added that by even in 1876 there were no fewer than 4 bridges in Oakland that crossed the Ramapo inclusive of the RR Trestle. That’s a lot of bridges for a remote town of a few hundred souls serving an area with only 3 small farms. Certainly, alleviating auto traffic in 1876 was not a motivation for building the bridges as Oakland wouldn’t even have paved roads until 30 years later. But we had a lot of bridges. While Franklin Township and Hackensack wouldn’t pave the roads in Oakland, they were more than apparently delighted to build bridges to nowhere here.

In 1890 there was a great flood along the Ramapo which destroyed the very original Doty Road Bridge and every other bridge across the Ramapo including the train trestle. Prior to 1880 the building and maintenance of bridges was a local responsibility, ie, Franklin Township. In 1890 the Bergen County Board of Chosen Freeholders dutifully surveyed the wreckage of the original bridge and authorized that a new one be built for the wild sum of $2,400 (1890: 439). The bridge design using a new Phoenix construction technology, was purchased from the Phoenix Bridge Company of Phoenixville, PA and constructed in 1891 by Dean and Westbrook of NYC.

Our beloved bridge originally was 80 feet long and 16.2 feet wide built on stone abutments that were encased in concrete. The original bridge road was laminated ash wood. And it was well built as evidenced by its surviving the great flood of 1902-3. But over the years, there were several efforts to strengthen the bridge. In 1937, it was repaired and in 1940 it was strengthened and the original wood planking was replaced with new planking. The ‘thunder’ continued. Then in 1957, steel decking was placed over the wood planking. It would ‘thunder’ never again. 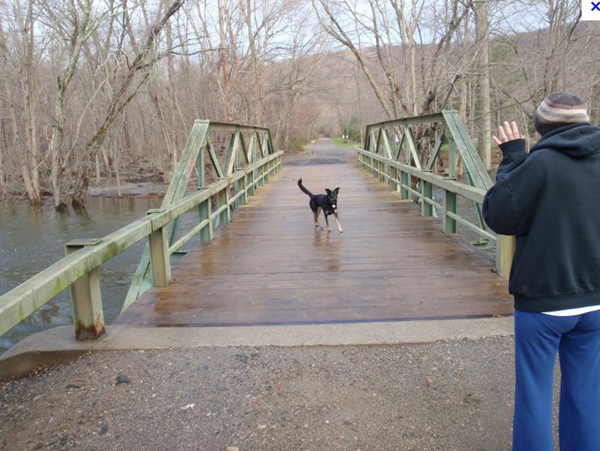 All was good until December 29, 1983 when an enterprising civil engineer of the Mahwah Engineering Company discovered that the bridge was being held together by rust and was about to collapse. He literally discovered rust holes in the primary center support beams and at 10:30 AM he reported his findings to Bergen County. It was closed and condemned by the County by noon of the same day. The immediate decision was to place a Bailey bridge over the original as to not disrupt traffic while the county sought funds to build a new one. This was done in 1984. The combination of the Doty Road Bridge and the Bailey bridge lasted about 10 years into the 1990s when it was ultimately replaced by a modern, concrete bridge without a soul. The ‘thunder’ and its 100 year history are gone forever. Along the way, the Pleasureland Pub was demolished as if offered as a sacrifice to the bridge gods as penance for the sacrilege of removing our beloved Doty Road Bridge. 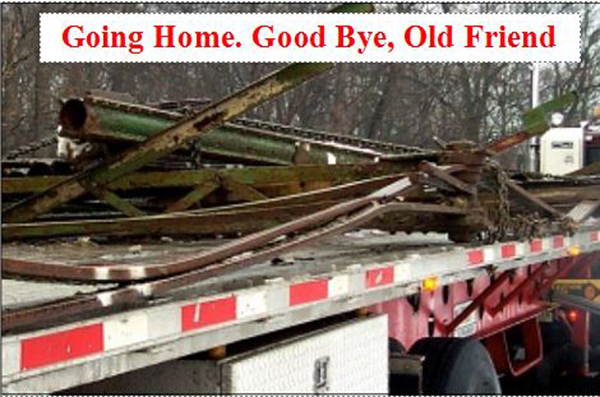 But alas, all is not lost as our Doty Road Bridge is to live on in Phoenixville, PA from whence it first came. It went home as it was sold to the city for the princely sum of $1.00 with the intent for it to be restored and used in their historic district. RIP to our friend and source of fond memories. Now if only the Pleasureland Pub could magically reappear as the Great Oak Pub. 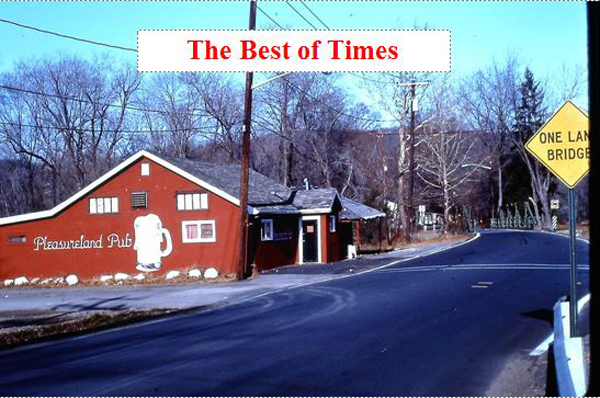 5 thoughts on “An Ode to Our Doty Road Bridge”