Home » OtherNews » Dead Wake: The Last Crossing of the Lusitania

Dead Wake: The Last Crossing of the Lusitania. By Erik Larson.
New York: Random House, 2015.
As reviewed by Ted Odenwald 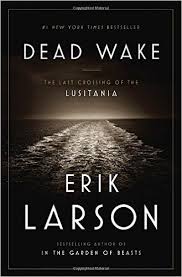 With his typically methodical gathering and organizing of details from the daily lives of passengers and crew members—and from the fated ship-preying hunt of U-boat commander, Walther Schwieger,—and from the operations of the British intelligence gathering office called “Room 40,” Erik Larson pieces together an engrossing narrative of the fateful voyage of the British ocean liner, Lusitania, torpedoed and sunk in 1915. Larson refrains from affixing absolute blame for the tragedy, but his factual reporting makes it easy for the reader to infer that blame falls in several areas.

On one level, the torpedoing by German submarine U-20 was a matter of chance. The Lusitania had left two hours behind schedule because of an exchange of passengers; a second delay occurred when Captain William Turner’s niece, who was visiting the liner in New York harbor, was nearly “stranded” on board. The Cunard Lines had instructed CPT Turner to save fuel costs by shutting down one of the ship’s boilers, thereby reducing the daily mileage by 110. Had these factors of schedule and speed been followed as originally planned, Lusitania would not likely have come close to U-20, which was heading “home” because of low fuel and ammunition. Another factor of chance was the lifting of a heavy fog, which would have prevented the Germans from detecting the enormous British liner. Additionally, just as Schwieger had determined not to pursue the much faster ship, Captain Turner ordered that his ship change course, thus placing himself at a 90 degree angle from the sub—a clear shot for Schwieger. Sixty percent of German torpedoes failed during this time of the war; this one did not, even though the U-boat commander’s calculations had been wrong; assuming that the liner was traveling at maximum speed, so the torpedo aimed amidships actually hit at an apparently more vulnerable spot beneath the bridge, causing a catastrophic explosions and the sinking within 18 minutes.

Larson summarizes puzzling issues, many of which have been evaluated in other studies. Winston Churchill, First Lord of the Admiralty, had hoped that a German provocation would draw America into the war. The British Admiralty had chosen to provide maximum protection to one of its “dreadnoughts” (battleships) , the Orion, but had declined to escort a passenger ship, even the magnificent passenger ship. This decision was more open to question as subsequent information about the history of “Room 40” revealed that there was, indeed, cause for deep concern. Having intercepted and decrypted German messages, British intelligence knew that a German killer sub “was heading south to Liverpool—knew the boat’s history; knew that it was in the North Atlantic under order to sink troop transports and any other British vessel it encountered; and knew…that the submarine was armed with enough shells and torpedoes to sink a dozen ships.” In addition, the Admiralty had cleared a shipping passageway over the northern end of Ireland; the southern rout to Liverpool ran below Ireland—and was considered dangerous. For whatever reason, these facts were never passed on to CPT Turner; he was sailing into a potential death trap, and the British Admiralty and intelligence community knew it.

Larson examines life aboard the Lusitania by detailing the activities of several passengers; he includes their general concerns for safety. These passengers report their conduct after the torpedo struck—how they abandoned ship, dealt with the 55 degree water, and survived. Sadly, man people perished because they were never drilled in the proper procedures for wearing a lifebelt or for boarding an assigned lifeboat. Many of the crew members were not properly trained in lowering the lifeboats. Many of the lifeboats could not be used; on the starboard side, the boats had swung out 5 to 8 feet from the deck, forcing passengers to leap. On the port side, the heavy lifeboats had swung towards the ship so that crew members could not maneuver them over the side. The ocean liner sank so quickly that many lifeboats were 60 feet above the water, while others, attached to ship, were dragged under before they could be released.

Of the 1,959 passengers, 1,195 perished; Larson traces how some bodies were recovered by boats which were seeking survivors; many bodies washed ashore in Irish coves or beaches. Identifying and burying the recovered bodies was a major challenge. Obviously, decomposition was a serious problem in the identification process. Often the best identifier was personal property. Three separate morgues and mass burial sites were established in Ireland.

Underplayed by Larson—but still shocking—is the remoteness of President Woodrow Wilson from the potential peril posed for shipping. His lack of interest or knowledge may have been the result of his infatuation, or obsession, with Edith Galt. He appears to have been more of a love-sick adolescent than a world leader, who should have been totally aware of the Germany’s dangerous expansion of its war plans. Certainly he should have been proactive in warning American passengers (189 aboard the Lusitania). Noted for being an outstanding orator, Wilson clearly misses the mark when he claims that America was a country “too proud to fight.”

Larson spends a good amount of time recreating Schwieger’s adventures as a submariner. Ruthless, competent, intuitive, and lucky, his successes as a roving killer helped convince German leaders that the submarine was a key weapon for winning the war by harassing the transportation of manpower and material to the allied forces. Larson’s descriptions of the U-20’s operations (diving, surfacing, recharging batteries, and firing) reveal how primitive and dangerous that type of vessel was. However, its success as in the destruction of Britain’s prize ocean liner, previewed a major change in the strategy that would prevail in two world wars.

Resurrecting the Lusitania story, Larson has revealed that the sinking is much more than an historical footnote. He has reminded the reader that it is a story of political intrigue and human tragedy, a story of society’s ability to create and destroy.