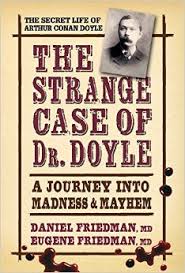 Drs. David and Eugene Friedman have pieced together an shocking solution to a mystery—or more of a head-scratcher, as the reader struggles to understand the book’s puzzling structure. Every other chapter is devoted to a detailed account of Arthur Conan Doyle’s first 30 years. The intervening chapters present a fictional guided tour of London’s notorious White Chapel neighborhoods, with stops at the locations of the Jack-the-Ripper murders.

The authors carefully develop a description of Doyle’s complex personality and then switch off to analyses of each of the gruesome murders of London prostitutes. The major mystery—“Where are the authors going with this?”—may be inferred several times throughout the book, but the ‘reveal” takes place clearly and directly in the epilogue, as the authors draw their conclusions.

In the biographical chapters, the authors document that Doyle was always considered to be extremely intelligent, ambitious, athletic, strong and agile. But there were also some troubling traits: he had little respect for authority, including law enforcement; he often acted impulsively with disregard for the consequences or for the feelings of those around him; he displayed a macabre disregard for life when he used various poisons to determine which killed seabirds most quickly; he also removed seals’ flippers, jokingly using them as mittens. His family life was unstable, as his mother was an adulteress and his father was an alcoholic, who eventually had to be institutionalized with symptoms of a mental disease most likely brought on by syphilis. Doyle’s doctoral thesis dealt with the very disease which he suspected had afflicted his father. Doyle displayed a tendency towards obsessive behavior: he had joined the Masons and progressed with unusual speed through the several degrees, only to drop out abruptly; while serving as a ship’s surgeon, he had seemingly enjoyed eviscerating seals with surgical precision; he also became an advocate of spiritualism, lauding the skills of mediums who claimed to communicate with the dead. The Friedmans are claiming that Dr. Doyle’s character was very complex.

The fictional account is an echoing of an actual tour of White Chapel in which Doyle and the highly intelligent members of the “Murder Club” retraced the “steps” of Jack the Ripper in 1903—17 years after the murders—trying to piece together all of the facts known by the public and by Scotland Yard—in hopes that time would have provided new insights. Each member of the club would ask questions, make objective observations, and propose hypotheses. In their fictional tour, the Friedmans have Doyle serving as the moderator for a team of amateur sleuths. Leading the group to the sites of all the murders, Doyle provides details: the most recently known facts about the victims’ activities, the physical descriptions of the crime scenes, the nature of each victim’s wounds (or mutilations), the murderer’s choice of weapon, his “arrangement” of each victim’s corpse, and the avenues and methods of escape and evasion. Doyle serves as the resident expert, answering the various questions and theories proposed by the group. He obviously is well-versed in all materials in the media and in the police records, and judges –often critically and condescendingly– the thoughts of the others.

The Freidmans’ epilogue pulls together the various facts that have been presented throughout the book. They believe that there is strong evidence that Doyle was Jack-the –Ripper. Their conclusions are focused upon several areas. Doyles’ personality was unstable—showing evidence of mental illness while remaining extremely intelligent. His motivation for killing would likely have been revenge against the profession that had led to his father’s hopeless insanity and terminal illness (which was the subject of Doyle’s doctoral thesis). Doyle himself experienced neurological symptoms which he may have believed to have been transmitted genetically to him by his father. Jack’s taunting of the authorities and sending out deliberately misleading evidence falls in the pattern of Doyle’s behavior (tasteless mockery and practical jokes and tricks—including a hoax in which he allegedly led scientists to believe that they had discovered “the missing link”). Additionally, some of the mutilated victims’ innards had been removed and arranged in a display which resembled Masonic symbols, which Doyle certainly knew.

The authors, long-time fans of the writings of Sir Arthur Conan Doyle, have turned the tables on this great author, using techniques that the great Sherlock Holmes and his creator would have applauded. They admit that there is no concrete proof of their contentions, but the mountain of circumstantial evidences is rather high.