Home » Local Events » The Search for the Retro Man

Looking Back, Looking Forward
A Shared Journey
By Kevin Heffernan

The Search for the Retro Man

A very close friend once suggested that I spend too much time in the past to which I lamely said, “Really.!?” That mixture of denial and confusion over the gentle remark was about the best that I could muster. As I write this, I’m 72 years old, born in 1945 and am retired. That somewhat makes me a geezer although it has been written that 70 is the new 50. Talk to me in a few years and I’ll give you my official opinion. But spending too much time in the past?

Can it true? How do I know it and if I am guilty as charged, what are the practical implications of doing so? Am I stuck in the 1950’s? So, I decided to take stock in my mental, physical and emotional attic to see if indeed the charge had merit. Indeed found massive amounts of things reflective of past times.

Perhaps my friend just might be on to something here. Could it possibly be that I am a walking, talking, breathing retro man? Did time stand still for me creating an emotional glue sticking me in the past? There has to be something to explain and salvage my sense of living productively in the 21st Century. Nobody really wants to believe that they are a Neanderthal. I needed to understand something expressed internally by views and manifest externally by artifacts. Has my possession of artifacts of the past shaped my mind. Or is it that my views have encouraged collecting and living with old things.

I remember my past very well from the time I was 4 or 5 years old. As in every life, there were many good times and some less so. Those memories are akin to old photographs, crystal clear snapshots of times, people, places and events. Memories don’t really change. With each photo-memory we can hear the voices, the cries and the laughter within the recesses of our silent selves. They are the images of the times and events that in part define us and shaped us into who we are today. They provide a deeper sense with a silence that is heard loudly by the soul stirring a clarity and a vividness of the moment.

The past becomes a yardstick by which the present is measured. There are the voices, the society and the mores. For me, the present almost always seems to lose in comparison. Do the kids of today completely lack the stuff of either ourselves or our elders, the strength of our ancestors? Occasionally omitted is the way we were raised during the 1950’s. The methods employed by our parents then would certainly put them in jail today. And the same can be said of our schools.

We didn’t have teachers who seemingly spend most of their time encouraging their student’s positive self image, suggest a time-out when students became unruly and nor did we require our parents to be slaves to our sport schedules and social activities. When we joined a sports team, we went to practice and arrived at our games on our bicycles, or we walked or we hitchhiked. We made the team and played simply because we were better than other kids who could not play as well. Too bad for them and sometimes for me when I wasn’t as good as I wanted to be. Sports Darwinism. Winning had nothing to do with equality and self-image. Trophies were awarded for victories, not for mere participation. Winning was winning and winning beat the hell out of losing and that’s what teams were supposed to do then. We weren’t forced to share our stuff in class, as what was mine is mine and keep your filthy hands off of it. My teachers were nuns for whom I had a begrudging respect for their tough love. They gave out homework assignments and demanded that we complete them. Tests were given, failing grades were made as appropriate, and scholarships were awarded based upon hard earned merit. Period. Some were left behind to repeat the academic year to

their shame. Violence in the schools was characterized as two kids with black eyes from a fight in the schoolyard who were sent home to meet the additional wrath of their parents. The literature of my youth was comic books with National Geographic thrown in for more salacious interest. And every Sunday we dressed up in our best clothes and went to church with our parents to listen to the mass in Latin and not understand a word. We were definitely going to Hell if we skipped going to Mass.

Are we more enlightened today and act and think better than in the past? Are modern man and family superior or are we on the road to becoming another Rome? The values of us geezers were given by our parents and their values were inherited and further refined during the Great Depression and WW II. They believed those values to be good and would provide a foundation for future Americans, us, their kids. 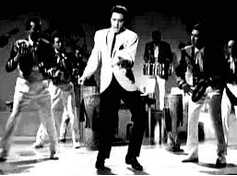 Then came rock and roll. Elvis, Buddy Holly, Little Richard, the Everly Brothers and so forth. Our parents went crazy in protest. Where, they cried, did the great big bands go, where are the crooners on stage with big microphones? Where are the singers with great voices that played on the radio during walks with their girlfriends? Why don’t kids say shucks instead of s–t when something goes wrong? Or infinitely worse…the F word. Certainly, they believed, the values of my generation would lead America to its ruin. Occasionally, it seemed that they would almost become despondent and prayed for the future of America almost to the point of offering animal sacrifices to the gods of betterment.

As a kid with greased hair, I definitely had the attitude of asking what do those old people know. They weren’t cool and just didn’t get it, dadyo. As much as I resented and disagreed with them, I realize now that they were right, very right. Unknown to our parents, they did a pretty good job in giving us good and universal core values developed by countless past generations.

Perhaps because of that I somewhat revere old things and fond memories.

Some say that the expectations and demands by today’s youth are wildly unrealistic. I tend to agree. At the same time, I’m not worried because the reality and competitiveness of the work environment in the 21st Century will crush any sense of self-deservedness. Ultimately they will learn the hard lessons of breaking ones butt to get ahead and that nothing, repeat, nothing, is due to them upon graduation other than a diploma. My daddy taught me that as his father taught him.

Sometimes when I’m making popcorn in the microwave, I wonder what Thomas Jefferson would think of that. Or when I turn my iPod to listen to great music from the late 1950’s and 1960’s, I think of RCA Victor and spinning 45 RPM records. I give an absolute nod to the present tech and its superiority to the systems of old.

We no longer have to crank our phones to get Mabel to complete our calls. Heck, my family had a party line when I was a kid. Often, though, tech is decried as far too intrusive and out of control. No longer do we have to adjust the rabbit ears on the black and white TV while watching the 5 or 6 channels all of which signed off at midnight. Today we complain that there is nothing to watch among the 400 cable channels. When there was a national event, we listened on the radio, read about it the next day in the newspapers or waited until the film of the event could flown in on a propeller driven plane and be developed prior to broadcast on black and white TV. 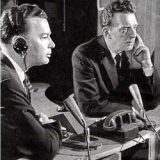 Contrast that with the today’s instant media where anyone with a cell phone anywhere can document any event and broadcast it to the world. Faster / instant? Yes. Better? I’m not sure. There was something reassuring about the great TV journalists of the day who gave us both the news and thoughtful comment. We were as informed as we wanted to be and that was just fine. Life in the 1950s was obviously very different. Some of the differences are subtle and most will slap one in the face.

Next Week – Part 2: Looking Back, Remembering and Reminiscing

2 thoughts on “The Search for the Retro Man”