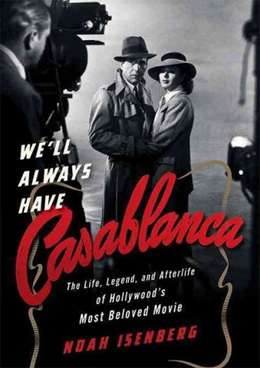 I might have passed over this book had it not been for the enthusiastic reaction to the movie by a college sophomore, required to view and critique ten American film classics. I was surprised that a young adult, living in the era of space adventures, Hobbit-quests, super heroes, zombies, and violent- action movies, should be enraptured by a seemingly dated, black-and-white tale. In his multi-angled examination of “Casablanca,” Noah Isenberg explores why this 75-year-old film “continues to live in our collective consciousness, as affecting to our hearts and minds now as it was from the start.”

Isenberg traces the history of “Casablanca,” from its creation as a Broadway drama, through its development into a screen script, to its production as a controversial film, and to its “immortality” through imitations, spin-offs, and cult-like followings. He discusses the selection of the cast, tracing the importance of the performance to the respective career of each artist. Isenberg also argues that “Casablanca” was the perfect picture for its time, examining world tensions, particularly the fears of European refugees and the question of America’s isolation or engagement in the battle against the Axis.

In 1940, playwrights Murray Burnett and Joan Alison had written Everybody Comes to Rick’s, based on Burnett’s harrowing experiences in Austria, helping relatives move their valuables out of the reach of the Nazis. The play depicted the trials of the refugees stranded in the Moroccan city while also capturing “the very mood and atmosphere of a city neither of [the writers] had seen before.”

Producer Hal Wallis of Warner Brothers obtained the rights to the play; his studio was one of the few willing to oppose Nazism rather than advocate isolationism. Singled out by a congressional representative as a warmonger, studio head, Harry Warner, claimed that it was his duty “to educate, to stimulate, and to demonstrate the fundamentals of free government, free speech, religious tolerance, freedom of the press, freedom of assembly, and the greatest possible happiness to the greatest number.” Warner Brothers was obligated to expose the Nazi threat to the entire globe.

The film script was the collaborative effort of unlikely partners. Julius and Philip Epstein were twins mainly known for writing comedies. “Sharp dialogue” was their trademark along with their enjoyment of ridiculing authority. Howard Koch rewrote the Epsteins’ script, trying to give it “more weight.” He was much more of a serious dramatist, interested in the “ideological underpinning” of a work. He was more into “legitimizing characters and developing serious drama than were his partners.” The Epsteins then rewrote Koch’s revision to “erase his most ponderous symbols and to lighten his earnestness.” Wallis, unhappy with the love scenes, brought in Casey Robinson for special rewrites; one of Robinson’s major contributions was replacing the “over-experienced American woman” in Burnett and Alison’s script with a European woman of greater virtue and nobility. Despite the disparate styles of these writers, the script, according to Isenberg, is ranked as one of the best screenplays, “frequently taught to aspiring writers and actors.”

The studio gathered an exceptionally diverse cast, each of whom could claim “Casablanca” as a major career stepping stone. Humphrey Bogart was already established as a star, but he was “an unconventional romantic lead.” Ingrid Bergman, a 27-year-old Swede, had few credits, yet greatly impressed audiences with her “stylish yet restrained femininity,” warmth, and tenderness. Paul Henreid, having trained in Austria, was playing Victor Laszlo, a leader of the Czech resistance; he was under a 7-year contract with Warner Brothers. Claude Rains, a British actor who played Vichy police Captain Renault, had earned honors for his role in “Mr. Smith Goes to Washington.” Conrad Veidt, a German, played Major Strasser, the film’s Nazi villain. Peter Lorre, a European from what is now Slovakia, played Ugarte, a killer being pursued by the Nazis. Dooley Wilson portrayed the jazz pianist, breaking stereotypes of black actors by being a close friend of the protagonist. Many of the supporting actors were, in fact, refugees, who had fled Europe even though they had had successful careers in performance. They escaped the terrors of Nazi oppression. The anxiety of the characters in “Casablanca” was modelled on these actors’ experiences. According to Isenberg, the tears of the young woman who led the singing of the “Marseilles” were real, elicited by her sorrow over the conquest of France and the takeover by the collaborationist government.

Isenberg claims that “Casablanca” resonates with American audiences because it “provides tangible evidence of not necessarily the way we were, but more important, the way we wanted to be.” Once critic believed that Rick represented “America’s mythical vision of itself—tough on the outside and moral within; capable of sacrifice and romance, without sacrificing the individualism that conquered a continent, sticking its neck out for everybody when circumstances demanded heroism.” When Ugartes was arrested, Rick Blaine said that he was “sticking his neck out for nobody,” apparently asserting the indifference of isolationism. Yet his part in the emotional scene in which the French sang the “Marseilles,” drowning out the partying Germans, gives evidence of his true leanings. And of course, the dramatic conclusion in which he kills Strasser, setting free both the woman he loves and her husband, reflects the romantic, moral side of this thick-skinned protagonist.

Isenberg says that “Casablanca” will continue to endure. It might not have the cult following that it had in the ‘60’s and ‘70’s, but its themes, characters, plot, tensions, and script carry a universal appeal. The anguish of the refugees’ scrambling for their lives is a sad, recurring story. The moral struggle of a being, who would prefer isolation but who knows that involvement is right, resonates with individual citizens and countries. The author discusses the attempts at creating a sequel, imitations, spin-offs, a TV series, a colorization, and a Broadway show. Isenberg claims that there are many who have viewed “Casablanca” numerous times. One of the joys in re-watching the film, he claims, “…is to indulge in the satisfying, childish pleasure of repetition, to relive and recite the comforting lines of dialogue, and to indulge in the fantasy of the characters as our dearest friends.” We’ll always have “Casablanca.”