On September 7, 1977 the road that leads through the middle of the recreation complex was named Lawlor Drive. Over the past 38 years a lot has changed in Oakland. People have moved into town, people have moved out, children have been born and a couple of generations have passed through the borough. During this natural passage of time many in Oakland do not know why the road was named Lawlor Drive. The Recreation Commission spent that past year coming up with a plan to correct this void.

In the jungles of Vietnam on May 20th 1970 an Oakland son gave the ultimate sacrifice for his country. His name was CPL Patrick E. Lawlor, better known as Pat to his friends. Pat was a 1966 graduate of Indian Hills High School, an outstanding pitcher and hero to everyone in Oakland. While growing up in Oakland Pat, like many Oakland children, spent a good part of his time at the recreation complex. In 1977 it was a fitting tribute to name the main thoroughfare through the complex Lawlor Drive. 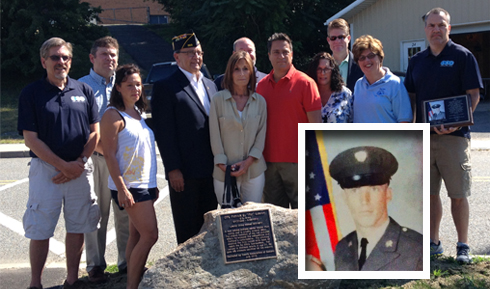 It was a very sunny clear morning on August 9, 2015. Behind field 8, which was hosting a baseball game, a small private ceremony was taking place to honor Patrick Lawlor. The ceremony was to unveil a new monument which would identify the road for future generations. Recreation Chairman Mike Guadagnino who led the ceremony explained how many people who now live in town did not know Patrick or why the road was named Lawlor Drive. In fact he didn’t learn about the history of Patrick or the road until 10 years ago. Within the past year Mike explained how the recreation commission felt they needed to fix the fact that there are no markers or anything else to identify why the road is named Lawlor Drive. 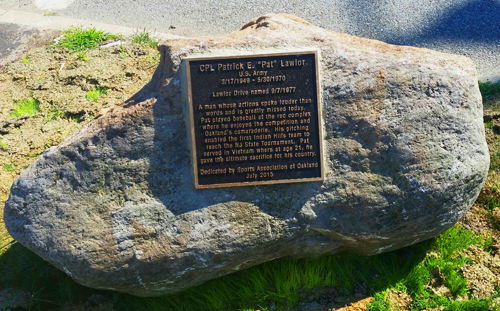 Mayor Schwager spoke about the importance of knowing our history and knowing how Patrick lived and became a hero. She added that this beautiful monument is a wonderful tribute to honor Patrick’s memory. Councilman Pignatelli spoke about the horrors of the Vietnam conflict as he is a naval veteran from that war.

Sports Association Chairman Jim Folkerts thanked his fellow SAO members for getting behind and supporting this project; he also thanked fellow SAO member Jim Fuhrman for donating the large rock from his yard which now acts as the monument where the plaque rests. Jim reiterated how important it is that we know our history, that this history has brought us to where we are today, and will lead us to where we go in the future.

Rec Chair Mike Guadagnino also mentioned that there were over 58,000 people who died in the Vietnam War. To many people that is just a number; a large number but still just a number. But each one of those 58,000 was someone who was loved, belonged to a community and each had their own personal story. Mike said he and Jim while working on this project got to know Pat’s personal story, and agreed that the recreation complex was one of the best places for his name to live on.

Along with the monument there is a smaller plaque with a photo that will hang in the Danny D’Elia building. Jim talked about how seeing the picture really put a face to a name and felt that powerful connection was important. 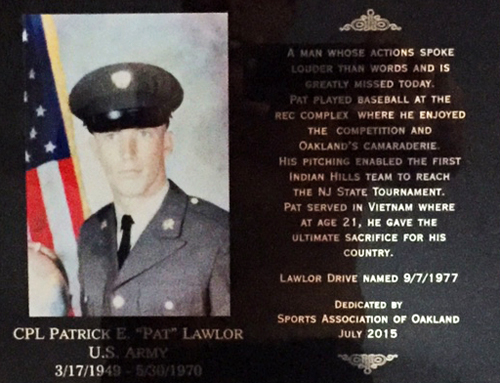 One of the most touching parts of the ceremony was the presence of Patrick’s sister Jean. It’s been 45 years since the loss of her brother but the pain of that loss is still very strong. Jean thanked everyone for continuing to keep Patrick’s memory alive and appreciated the town taking the time and effort to erect this monument.

It is also important to recognize Recreation Chair Mike Guadagnino, his fellow commissioners and the Sports Association of Oakland for bringing this needed memorial not only to Oakland but to the recreation complex. For generations to come, everyone will know a little about CPL Patrick Lawlor and why the road has the honor of being his namesake.