Sofia Ebio, a junior at Indian Hills High School, in Oakland, NJ, appeared before the Ocean Grove Historical Society Board and presented her one-woman play, Sarah Downs: Fighting for Temperance and Women’s Rights in New Jersey 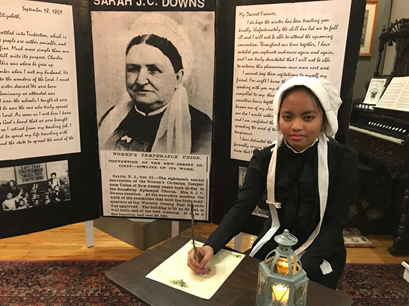 Her interest in the New Jersey temperance president was ignited after attending the Women’s History Walking Tour this summer in Ocean Grove. Downs, an Ocean Grove resident, was active in the temperance movement and in the suffrage movement in the latter part of the 19th century.

She has advanced to the state finals five times and was a national finalist three times. Her past New Jersey projects include child labor in New Jersey and the Morro Castle. Her team’s National History Day exhibit on the Morro Castle is in the Sea Girl Lighthouse Museum. Her team was also featured in the book Sea Girt Lighthouse. She has been invited to perform at summer historical events at the Ocean Grove Museum.

She will compete at the National Competition at the University of Maryland, June 11-14. Students from all fifty states, Guam, American Samoa, Puerto Rico, and international schools in China, Korea, South Asia, and Central America will showcase their months of primary research. Less than 1% of all projects make it to the national level. National History Day engages students in historical research and skills development. Annually, more than half a million middle students participate in the program.

Her History Day coach is Judith Vihonski, the former gifted and talented coordinator for the Oakland Public Schools.