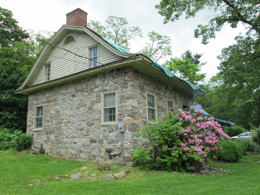 The Borough of Oakland and Ramapough Conservancy are proud to announce that they have received a grant award of $44,000 from the Bergen County Historic Preservation Trust Fund for repairs to the Van Allen House property. The grant was approved by the Bergen County Board of Chosen Freeholders on June 19, 2013.

The award is split into two parts: $16,200 has been designated for the restoration design and architectural drawings of the Van Allen House, and $28,200 will be used for the preservation and stabilization of the Stream House on the same property.

“On behalf of our donors and our board of trustees, I am thrilled for the company and for the community that Ramapough Conservancy has received this prestigious grant from the County of Bergen” says Judith Sullivan, President of the Ramapough Conservancy. “The County Historic Preservation Program is run by a wonderfully supportive professional, Robin Brown, and without her assistance, we, as first time applicants, would not have been as successful as we have been in the grant approval process. In addition, Oakland’s governing body, including Mayor Linda Schwager, and the Borough Administrator, Richard Kunze, have been incredibly supportive of our work and mission. The Land Conservancy of New Jersey has been a wonderful teacher and mentor to our company, and we thank David Epstein and our intern Elizabeth DeBlock for their unending support.”

The Van Allen House is a Dutch stone house built in 1748, located at the corner of Ramapo Valley Road and Franklin Avenue in Oakland. The house is listed on the National Register of Historic Places most notably for its architectural significance and its connection to the Revolutionary War. Documents show that George Washington and his troops stopped at the Van Allen House on July 14, 1777 on their way to West Point.

The Stream House, also known as the Vygeberg Farm Office Building, is another significant building located on the same site as the Van Allen House. Edward Page built the Stream House in 1902 as the office for his dairy farm. Page was one of the area’s wealthiest businessmen and served as the mayor of Oakland for a period of time. This building is unique because the stone foundation was built directly over a stream. This allowed the basement to act as a cool storage space for dairy products. This building went through several other uses including Oakland’s first public library.

These buildings are both extremely significant to Oakland’s history and are in desperate need of preservation. The Ramapough Conservancy is currently leasing the property from the Borough of Oakland in order to apply for grants and to raise the funds necessary to restore both the Van Allen House and Stream House.

The Ramapough Conservancy is a nonprofit group formed by Judith Sullivan with the mission to preserve and protect the natural, cultural, and historic resources of the Ramapo Mountains area. To find out more information, please visit www.ramapoughconservancy.org. The Conservancy will continue to seek additional grants, private donations, and help from volunteers. If you would like to become a volunteer, please contact Judith Sullivan, judithjoansullivan@gmail.com. If you would like to make a donation towards the preservation of the Van Allen House property, please send a check to Ramapough Conservancy at P.O. Box 1205, Oakland, NJ 07436.