Part 2: Trump: On the Issues 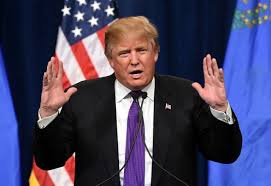 Every candidate running for office has beliefs about what he or she thinks the government should or shouldn’t do. We may disagree about whether they make full economic or logical sense, but we want to know not just what a candidate wants to do but how he or she is going to do it.

For the longest time, Donald Trump had just a small handful of issues even mentioned on his website. Now, that may seem understandable especially at the start, but last I checked his website as the presumptive nominee, Trump only lists how he feels about seven issues, one of which (“Paying for the Wall”) really should be part of another listed issue, “Immigration Reform.” Trump has occasionally commented on other issues but then he seems to change his mind on those or says his words were taken out of context. So then, the question is what does Trump believe on the many issues that are not listed? Maybe later posts and debates will tell.

But if we really want to know about a person, we also need to not just look at what one is saying now, but what they have said and done in the past as an indicator about them for the future. We already know about Hillary and how she’s changed her mind on so many issues, it isn’t even funny—a simple YouTube search for “Hillary Clinton flip flops” should do the trick, and I’m not talking about what she wears when she goes to the beach. That’s at least something I’ll give Bernie Sanders credit for: I think he’s nutso-left, but at least he’s been pretty consistent about what he believes and sticking to them.

Now, I’ll grant that sometimes people change their minds because they got a new perspective on an issue or were convinced by a good argument. I’m not anti-open-mindedness, but I am skeptical when people change their own views on so many things consistently and can’t provide credible reasons as to why he or she did so. Then was your mind really changed? Were you peer pressured into it? Or is for personal gain that you sell out your morals and values just to please other people?

In the past, Trump has been on one side of many issues on which he is now suddenly on the other side. Trump supported banning assault weapons until he wasn’t anymore.

Trump was pro-choice until somewhere in the last decade. Trump says he wants to cut taxes, but he advocated as recently as a few years ago imposing a one-time 14% net worth tax on the wealthy to pay down the debt, and he said he wouldn’t sign a pledge not to raise taxes because “I may want to switch taxes around”. And he supported universal healthcare when he ran for president before. (Yes, Trump ran for president under the Reform Party in 2000.) But healthcare was an issue that many Republicans balked about when Mitt Romney was the 2012 nominee. Remember when many conservatives said they felt Romney’s opposition to the Affordable Care Act became moot because of his own “Romneycare” program when he was governor of Massachusetts? Well, count 2016 on that moot point list too for healthcare thanks to Trump.

More recently, Trump has had several flip-flops while on his presidential campaign. He’s changed how tall his proposed wall is going to be. He’s changed his mind about a policy in a debate, literally saying what was on his website was wrong just to have a statement come out after the debate saying Trump was wrong on stage and his website was correct. He has said that global warming “was created by and for the Chinese in order to make U.S. manufacturing non-competitive” in a November 2012 tweet. Although, when I last checked, he still didn’t believe in global warming, he recently cited climate change as the reason why he needs to build a wall (of all things) at his Ireland golf course to present erosion.

So now Trump expects me to believe a word he says? He comes out with an impressive list of judges he’d want to appoint to the Supreme Court, but I have zero confidence that he’d actually follow through on appointing any of them. What’s to say he won’t change his mind and appoint a liberal to the court because he was able to make a “good deal” for something else? If that’s the case, I might as well have voted for Clinton! If Ted Cruz’s catchy motto was “TrusTED,” then is Donald Trump’s motto “TRUstnot?” Like Cruz or not, most could agree that you knew exactly where he stood and that if he was elected, he’d do exactly what he said he’d do. You can’t say the same with Trump because he’s as much a wild card as his hair in a hurricane. Or maybe I should say, as wild as the finances in Atlantic City where he had casinos for a while. And if you want to see even more, Stephen Colbert had a very good clip of some other Trump contradictions as well.

I want someone to vote for that not just is saying the things I agree with, but someone who has proven to stick to those core beliefs and actually will put country first over self. Clinton has proven that’s not her; otherwise, why put national security at risk by putting your emails on a private server and lying to families about the Benghazi attack? What does that say about one’s character that if you can’t be truthful to families of the deceased that you can be truthful to those still alive trying to make important decisions? But Trump certainly isn’t any better with the words coming out of his mouth not matching his previous and current words and actions.

In the next part, I’ll address Donald Trump’s personal background.