Home » OaklandNJ » Is Oakland in The Hunger Games? 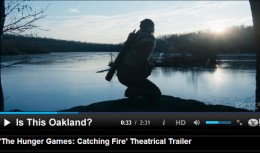 “Ending up on the cutting room floor”, is a phrase that came about before the days of computers when film editors would physically cut the film strip while editing it. That scene would then be tossed on the floor, and never make it to the big screen.

That’s the question right now regarding Oakland and the new Hunger Games movie Catching Fire. Did Oakland make it to the big screen, or did we end up on the cutting room floor. A new movie trailer released in July seems to say – yes. (New video trailer at bottom of post)

A previous Journal article from January 2013, reported on crew films parked on Skyline Drive as additional scenes for the movie were filmed long after most shooting had concluded….and  Atlanta, Georgia and O’ahu, Hawaii  in the spring and summer do not look anything  like Oakland, NJ in the winter.

While Hollywood is more than capable of creating a fake winter scene, some scenes simply cannot be faked – such as removing all the leaves from trees. So, the accompanying still image from the new Catch Fire trailer seems to say – yes, Oakland makes the cut. 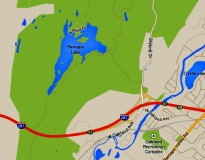 The film crew, in January of 2013, was reportedly given a permit to film on the northwest shore of Ramapo Lake; and, this still image from the video below could be Ramapo Lake.

For fans of the Hunger Games, the new movie appears promising in both looks and storyline. Katniss and Peeta return home after their victory in the last movie; and as victors,  they are part of a “Victory Tour” that visits all the districts. It is during this tour that Katniss begins to believe that a rebellion is brewing even though the Capitol remains a protected bubble under President Snow’s rule.

The last movie saw the rules of the Hunger Games changed, and Katniss and Peeta were both allowed to live, something that President Snow is determined to correct in the new movie. In Catching Fire, Snow makes plans to assure that both Katniss and any hope of rebellion are killed.

While the core of the movie is built around action and suspense, the romance story between Katniss & Peeta – if it ever actually existed – is another part of the movie that is carried over in Catching Fire.

The movie is to hit theaters in late November of 2013, and probably another trailer will be released this autumn. Till then, there is high hopes that Oakland stays in the picture.

Click to see larger still image from video – is it Ramapo Lake?