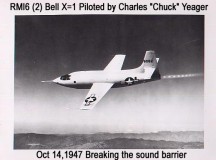 On this day 65 years ago, Captain Charles “Chuck” Yeager broke the sound barrier.

Yeager’s claim to fame was his historic flight, being the first pilot to break the sound barrier. Yeager achieved this by flying his Bell X-1 rocket powered aircraft #46-062 at Mach 1.06 (807.2 mph).

Yeager named his aircraft after his wife Glennis, naming it “Glamorous Glennis”. In December 1953 he flew a Bell X-1A rocket powered aircraft at Mach 2.44 (1,650 mph).

This record stands today for a straight winged aircraft. The record breaking Bell X-1 rocket powered aircraft is on display at the Smithsonian Air & Space Museum in Washington DC.

This historic flight wouldn’t have been possible if it weren’t for the efforts of Reaction Motors, Inc.
Four members of the American Rocket Society (ARS) conducted experiments with their “crude” rocket motors in the mid 30″s in the New York and New Jersey area.

According to the late Howard Ball, a newspaperman and local resident, 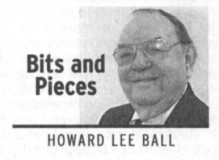 “It was behind what looked like a bicycle shop, and, of course, you couldn’t buy bicycles during the war, because they were frozen, and I tried to buy a bike there and the guy said, “We don’t sell bikes.” I said, “Well, what you got them in the window for?” He said, “That’s none of your business.” … Then, I found out, … from my teacher, that James Hart Wyld and Lovell Lawrence, [Jr.], were there and they were experimenting to build a liquid fuel rocket, which they did, and it was the one they sold; they sold it to the Navy, and that was the foundation of Reaction Motors Company, and so, all those things were going on…

Police Chief William Charles was the only person who knew about the Lake Inez tests. The noise scared the pants off all of us. We were told it was a new explosive at DuPont.

I had dinner with James Hart Wyld in 1947. He was married to my teacher Helen Lindsley. He was a character. First person I ever saw on a motor scooter.” 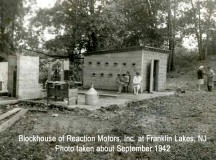 At this location, RMI built a block house and test stand. Rocket motors ranging in size from 300 lbs. to 3,000 lbs. thrust were tested. These motors were intended for use as JATO (Jet Assisted Take Off) motors.

According to local resident George Berger, the location was next to Lower Lake and an airport with a grass runway. Near the airport were chicken farms. Whenever RMI conducted motor tests, the chickens stopped laying eggs. The farmers approached RMI for compensation for loss of egg production and received compensation.

In September of 1942, a large flash of light startled Franklin Lakes residents who thought a plane had crashed. The State Police and the Oakland NJ volunteer fire department responded. The result was that RMI was instructed to obtain building permits for the structures already built.

The block house remained on the property until 2005 when it was torn down.

Through the efforts of local historian Edward J. Lenik, this site was nominated and placed on The National Register of Historic Places in 1978 (ID number 79001472)

Having outgrown both their Pompton Lakes and Franklin Lakes facilities, RMI moved to Pompton Plains in 1943.
RMI took over the Shaw Silver Factory building and the adjacent Dunn Sandpit. 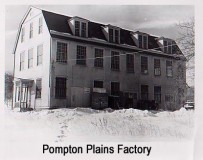 They set up shop in earnest and constructed test stands. According to the late Harry W. Burdett, Jr. , first RMI engineer, the original regeneratively cooled rocket motor was the basis for the XLR-11,6,000 lb thrust rocket motor. This motor was destined to power the Bell X-1 and other X planes.

RMI was a very noisy neighbor and correspondence went back and forth between the township and RMI.
The police chief had to deliver the bad news to RMI for them to find another location, unfortunately, the bearer of the bad news was his wife a secretary of RMI. RMI moved shortly thereafter. A marker was dedicated on October 9, 2010 at this site.

After leaving Pompton Plains, RMI moved its manufacturing and test facilities to Lake Denmark, near Picatinny Arsenal in Dover. Tests continued on the XLR-11 as well as other rocket motor designs.

NARTS April 1, 1950
NAVAL AIR ROCKET TEST STATION was established at Lake Denmark, Picatinny Arsenal, Dover. This test area was in the part of the former Naval Ammunition Depot. Its mission was to static test and evaluation or rocket motors, their components and propellants.

Denville 1955 – 1972
Having outgrown its Rockaway facilities, RMI broke ground in 1954 for a new facility to be located at 90-100 Ford Road. The new RMI plant and administrative facilities were built under a joint RMI-Navy program, reflected the rapid growth. The new plant comprised of 200,000 square feet and located on 50 acres. The cost was $4,000,000.

In 1956, the new Denville facility was outgrown, so the former Rockaway facilities were reoccupied as well as additional locations in Rockaway, Dover and Lake Denmark, increasing the square footage to 300,000.

On September 25, 2005, the AIAA (American Institute of Aeronautics and Astronautics) placed two markers at the site to honor the many achievements made by RMI/RMD.

Thiokol Merger 1958
In 1953, RMI became associated with the Mathieson Chemical Corporation and were looking to diversify its product line. That lasted until 1958 when Thiokol purchased the rights to RMI and it became the Reaction Motors Division of Thiokol.

X-15 1956 – 1968
In 1954 a joint Navy, Air Force and NASA project had begun to produce the X-15 rocket-powered aircraft.
With the vast experience in rocket motor development, RMI was awarded a 1 million letter of agreement to produce the power plant for the X-15. 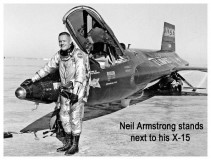 The X-15 is on display at the Smithsonian Air & Space Museum in Washington DC.

On display at the New Jersey Aviation Museum in Teterboro is a XLR-99-RM-1 rocket motor. The late Neil Armstrong, first man on the Moon was a test pilot on the X-15 program and flew seven flights.

Test Area “E”
With the development of the X-15 XLR-99-RM-1 motor, a new test stand was required. On top of a hill along Snake Hill Road, the test stand began to take shape. Ted Sloberg designed the test stand and William P Kelly, superintendent of test operations, built the facility.

One of the greatest test stands on the east Coast is slated to be demolished by year’s end unfortunately.
More information can be found on this web site: www.bobholland.com/me/reaction.htm

Security
RMI/RMD was classified as SECRET under government rules and regulations that required an 8 foot chain link fence, a 24 hour company armed guard force and other necessary security measures in force.

One Fatality
In its 31 year history, only one fatality occurred, one too many! In a September 17, 1957 New York Times article, the following account was revealed.

“Dover NJ – Sept 16 – One man was killed and six others were burned today when a rocket engine exploded at the Naval Air Rocket Test Station at Lake Denmark near here.

The engine was being prepared for a routine test when the accident occurred, according to a spokesman for Reaction Motors, Inc of Denville, manufacturer of the device.

The dead man was identified as Herbert Bell, an employee of the Chance-Vought Aircraft Company of Dallas.

Four of the six injured were admitted to Dover General Hospital. They are R L Johnson and R D Tweedy, both employed by Chance-Vought , and William Dellecker of Hackettstown and Hjalmar Lagerquist of Ramsey, both employees of Reaction Motors. Mr Dellecker was listed as being in “poor” condition and the others “fine”.

Glenn Repp, a Chance-Vought representative, and Elmer Bajeri of Rockaway, an employee of Reaction Motors, were treated at the hospital and released.

The employees of the two companies were relocating the rocket in a test building where the blast occurred at 11:30 am.

The End Is Near – 1972
The technology developed by James Hart Wyld, the regeneratively cooled motor, has been the basis for all liquid fueled rocket motors, and is still used today in rocket motor designs. 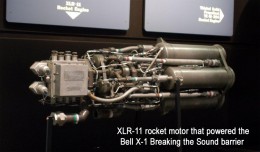 RMI/RMD had many “firsts” and designed, developed and tested many unique motor innovations. During the later part of 1971, contracts became less and less and the handwritings on the wall were evident.
Reaction Motors Division of Thiokol ceased operations in July 1972.

On August 11, 1972, the assets of RMD were put up for sale. The equipment was up for grabs, as well as 55 gallon drums of rocket parts sold as scrap.

The alumni of RMI/RMD meet on a biennial basis for their reunion. This year’s 18th biennial reunion was held on Sunday, September 23rd at Zeri’s Inn in Mountain Lakes.

It Happened in Pompton Lakes, By Howard Lee Ball

From Pompton Lakes to Outer Space, By Howard lee Ball