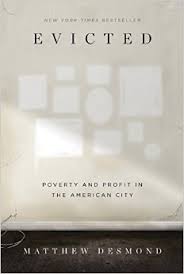 Through his gripping, first-hand accounts of the heart-rending struggles of several families, sociologist Matthew Desmond exposes a monstrous process that engulfs millions of Americans in a downward spiral of poverty. Moving first into a trailer park and then into inner city housing in Milwaukee, Desmond had observed the devastation inflicted upon individuals, families, and communities through eviction.

The narrative chapters, which comprise more than ¾ of this book, are simply- told stories of impoverished families –both White and African-American—forced by their economic situation to live in sub-standard housing with not much hope of improvement. Their rents can consume up to 80% of their monthly incomes, leaving them with little to purchase provisions or furnishings, or to receive proper health care. By moving into these two impoverished communities, Desmond was able to gain the confidence of many of the residents so that he could, with their permission, digitally record their accounts of financial struggles. He also witnessed many encounters between threatened or evicted families and their landlords, city officials, or professional movers/removers. The author’s detailed notes at the end of this book amplify his observations with summations of related sociological/ethnographic studies.

Basically every tenant whom the author describes is barely surviving financially. They quickly fall behind in their rents, risking court-ordered evictions after which they are offered the choice of having their belongings left at the curb or in storage (which, of course, carries a fee which the poor can’t afford). In either case, most all possessions will be forfeited. A person or family with a record of eviction can expect to have difficulty obtaining a new location because evictions become public records. Certainly, there will be little chance of moving to better housing. While paying disproportionately high rents, the tenants often discover that their utilities are unreliable, and that the landlords are frequently unresponsive to requests for maintenance support.

Desmond managed to get the permission of the landlords and /or property managers to follow them around, taking notes of their daily interactions. Profit was the motivation behind most of these dealings. Owners charged relatively large amounts, knowing that the fees would consume a large proportion of the renters’ incomes; they also knew that the renters found the poor living conditions desirable because the trailer homes and houses were relatively acceptable shelters located in neighborhoods that were free of crime, gangs, and drugs. Evictions were common for those who brought undue attention upon the property—including 911 calls for medical emergencies. Families could be forced out if a child drew attention to the housing by pulling a prank, such as throwing a snowball at a passing car. The owners “earned” 10 to 20 times the income of their tenants. One landlord was totally indifferent to the plight of the tenants in his trailer park. The owner of several rundown properties did occasionally sympathize with some of her tenants, but then, using the courts as her weapon, would ruthlessly chase people who were behind in payments; taking a small loss was not too bad if she could move new tenants in quickly. Each year she celebrated her financial success by traveling to the Caribbean.

In his chapter, “About This Project,” Desmond explains how he was led into this study. He had witnessed his family’s loss of his childhood home –lost to a bank. While attending college, he came close to the problems of poverty when he worked on weekends with Habitat for Humanity. He also spent many hours with homeless people, trying to “understand poverty in America, which I saw as the wellspring of so many miseries.”

As a graduate student at the University of Wisconsin in Madison, he studied literature on the causes of poverty. He found evidence of a disconnect: the poor were not considered a part of the American society as a whole. They were “…said to be ‘invisible’ or part of ‘the other America.’” “[He] wanted to try to write a book about poverty that didn’t focus exclusively on poor people or poor places. Poverty was a relationship…involving poor and rich people alike.” To understand that relationship, he focused upon evictions as a process that “bound poor and rich people together in mutual dependence.” The remainder of the chapter explains his research methods and the challenges which they presented.

Desmond’s epilogue, “Home and Hope,” summarizes his conclusions drawn from the study. “America is supposed to be a place where you can better yourself, your family, and your community. But this is only possible if you have a stable home… The persistence of brutality of American poverty can be disheartening, leaving us cynical about solutions.” A consequence of evictions is a lack of “residential stability” which influences the “psychological stability” of the entire community. Losses of home, school, and possessions are direct results of evictions. Consequently, the spirits of the evicted are crushed.

The author contends that the situations he experienced in Milwaukee are typical of many of America’s large cities—and that each year, millions of our citizens are evicted. They are evidence of a failing system which has basically ignored a large segment of the population, a segment which needs to be lifted up and embraced, not cast out.