Home » Local Events » Trump Conclusion: What Is One To Do?

Part 5: Conclusion: What Is One To Do?

So after explaining, exposing, and trying to put Trump into some sort of perspective, the question still remains as to what “we” are supposed to do. The amazing thing with this election is that there are a lot more “we”s than one would think.

“We” includes the many Sanders supporters who detest the hypocrisy and policies of Hillary Clinton and after such a long, hard fought primary season cannot imagine casting a vote for her but at the same time, do not want to support Donald Trump.

“We” includes the conservative Republicans who do not want to see Hillary Clinton but are finding its harder to support someone like Trump than it was to try and support someone like Mitt Romney or even John McCain because of style, past history, and some beliefs and stances.

“We” includes the establishment Republicans who also do not want to see Hillary but at the same time can’t put their faith or trust behind Trump to be a solid, trustworthy and steady president and neither want to devote funds, volunteer time, or even cast a vote his direction.

“We” includes the independents who are part of the reason why not only the unfavorable numbers of both Trump and Clinton are so high, but also part of the reason why normal fringe candidacies like Libertarian Gary Johnson and Green Party candidate Jill Stein are polling at 10% and about 3% respectably which is almost unheard of for third party candidates in a general election.

As for myself, I am turned off by Trump by some of the things he says, the way he acts, and the fact that I can’t trust him to say he’ll do anything he says he wants to do because his history has shown that he does only what is best for him and that anything and everything is a deal. If he becomes President Trump, does that mean the nominations to the Supreme Court become a deal with Democrats to find someone that pushes the court further left? If we have President Trump, will issues that I hold near and dear be bargained away so he has political capital to build his whatever feet wall it’ll wind up being at the border? And maybe most importantly to me, if we have President Trump, what will that say about America to the world, and to God?

Now as someone who’s faith plays a major part of my life but my interest in politics is what people know I’m always following and interested in, politics and religion quite often mix in discussions, against the social norm that those are two topics that shouldn’t be discussed in public at all, let alone together in the same breath. Some Christian friends remind me that government is not God nor should it be treated as such, and they are right: it shouldn’t be at all, but they seem to use that as an excuse why Christians shouldn’t be concerned with the morals, character, and policies that we have as a country and a government here in the United States.

I think that as a Christian, we need to choose our leaders wisely because they represent us as a country and us as a people. For example, I’m not Catholic but I do care a bit what the Pope says because for people who don’t completely understand Christianity, the Pope is the Earthly face of our faith. I disagree with that, but to many, that’s how the Pope is viewed, so I take some interest in what the Vatican does because it in turn effects what people are going to ask and wonder about me as a Christian.

I firmly think the same goes for the leader of America. People in France or Iraq or Israel probably aren’t following the ideological battles in both political parties that play out on Fox News, CNN, and MSNBC on a daily basis, but if we elect Trump, they’ll see the person who is in charge all the time: an arrogant, self-serving, non-apologetic, “Two Corinthians” President as the leader and face of America. I don’t think that represents me as an American or me as a Christian and if I’m going to vote for someone, it better be because its FOR that person and not AGAINST someone else. People didn’t really follow Jesus because he was anti-Pharisee, but because they believed in Him and his message and we need to get back to that when we choose our leaders. Are we voting FOR someone because we agree with them or AGAINST someone else because we didn’t like the other option?

I ask you if you are struggling with this to do the lawn sign test: for the person you plan or are thinking of voting for, would you put up a lawn sign in your yard saying you support that person? Would you tell your family and friends that you plan to vote for that person? And ask yourself why or why not? Are you proud of the person you plan to vote for because they represent your values and stances or are you a bit ashamed because you know what others are going to say if you tell them who you are voting for? If you are a Trump supporter, would you feel comfortable telling your Muslim or developmentally disabled friend/s that you were supporting him? If you are a Hillary supporter, would you feel comfortable telling those who are in the military or those who lost their job because of American taxation policies that “you’re with her”? Likely not, and so, think about that impact and scenario before you decide who to vote for.

As for me, I feel totally screwed. Ask any of my friends and they’ll tell you just asking me about this election puts me in an angry and frustrated spiral that they then later regret ever starting in the first place. There is no way I’m voting for Hillary but the only way for me to vote Trump at this point is if he convinces me that I can trust him and he’ll tone down the things he’s spewing. Yet, even occasionally when we see “teleprompter Trump”, it hasn’t convinced my mind all that much. I ask myself the question that if Trump ran as a Democrat, what would I say about him? The party that nominated him? The people that voted for him? And not wanting to be a person of hypocrisy, I’ve decided that I’m one of the #NeverTrump people because I know what my Facebook feed would look like against the Democrats if Trump was their nominee.

I was hoping for a credible third party option I could get behind but after looking into him, Gary Johnson is too liberal for me and in an online survey I took, he falls even more left than Trump does. I could vote for someone in another party, but then if that’s the case, I might as well just write someone in because they’d have the same chance as any of the others would and at least I could vote for someone who shares my values. Then there was the time when maybe a dark knight candidate would come through when Bill Kristol and Mitt Romney were actively looking for someone else. But in all seriousness, most likely, that person would only take votes away from Trump unless they were so moderate/liberal leaning that said unicorn candidate could unite conservatives, moderate Republicans and Democrats, and upset Bernie supporters which in today’s climate, I’d have to see to believe. 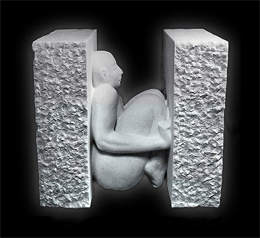 One option I won’t do is not vote at all because I feel it is my obligation to voice my say and perform my duty to assist in picking the next leader of the country I am a citizen of. The person I plan to write-in at present time is one that probably very, very, very few readers would know of and if I didn’t vote for that person, I’d probably wind up writing in Ted Cruz, Rick Santorum, or Scott Walker. But at present time, I can only pray for our nation, our candidates, and our voters who have a choice between a hard place and a hard place with little or no place to go for a candidate that could be somewhat tolerable at least until 2020 when we have the promise of doing this all over again, but knowing in all likelihood, we’ll wind up choosing two candidates that makes everyone wonder once more, “how’d we get these two?”