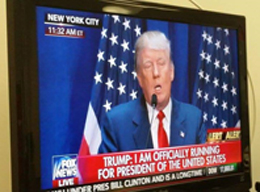 I still remember where I was when “the Donald” announced he was running for President –I even have a picture of the television screen as he announced. I wasn’t like many who thought that Trump’s announcement was going to be pure fluff or just a stunt. I had information a few days before his “announcement” that Trump and his team had invited certain groups and organizations to attend whatever he was going to do. And I thought: does this sound like a real announcement for President or is it all a sham to announce something about the next season of Celebrity Apprentice?

It was then that he took the stage and started one of the most bizarre announcement speeches of all time. It was here that Donald Trump announced himself as a candidate as a loud, direct, brash, and non-politically correct person. It was on day one, hour one, where Trump made comments such as “When Mexico sends its people, they’re not sending their best…They’re bringing drugs, they’re bringing crime, they’re rapists, and some, I assume, are good people” and “I’m using my own money. I’m not using the lobbyists. I’m not using donors. I don’t care. I’m really rich, I’ll show you that in a second. And by the way, I’m not even saying that in braggadocios … that’s the kind that’s the kind of thinking you need for this country.”

Upon listening to this unpredictable, free flowing speech that my speech teacher would’ve given me a C-minus on, I left wondering what a Trump candidacy would actually entail over the long haul. Some comments he made already put him on a path of doom in my opinion as I knew the media would endlessly cover his grandiose statements and unpolitically correct answers. I am certainly not a fan of political correctness, as I think it’s starting to reach levels that do not allow people to speak what’s on their mind without someone feeling “offended” by something. On the other hand, broad, unquantifiable statements are not justified. The infamous Mexican comment for instance: not all people trying to come from Mexico are bad people, drug runners, and rapists, but unlike the rosy picture of immigrants used to push open-border policies, there are certainly people coming into this country who want to cause us harm or plan to feed off of our welfare system.

But that speech not only foreshadowed what was to come from Trump, it also proved to put analysts and pundits into a tizzy. Comments from speeches, rallies, and debates that would have put almost any other candidate into a downward polling tailspin instead propelled Trump sky-high to become the nationwide GOP front-runner. I too thought that the “Trump train” couldn’t last too long with his comments against Megyn Kelly, his fellow candidates, and against other people who dared to say something not in favor of Trump. But that was all wrong.

What bothered me the most, though, was how he decided to attack his political opponents—very rarely about what they believed, but instead how they looked or how Trump felt or thought about them. Cue the following list: “Low energy” Jeb Bush. “Little Marco” Rubio. “Lyin’ Ted” Cruz. “Very weak” Ben Carson. “Puppet” Scott Walker. “Nasty” Lindsey Graham. Should the list go on? But then, even more amazing, Trump says all of those things about his fellow Republicans (disobeying Reagan’s 11th Commandment that “Thou shalt not speak ill of any fellow Republican”) and then says he’s doing it merely just to win.

Essentially, Trump will say and do anything to win, including saying and promoting things about your opponents that aren’t necessarily true. He said Ben Carson was a rapist. He said a National Inquirer story about Ted Cruz having mistresses was true. He even accused Ted Cruz’s father of having a role in helping Lee Harvey Oswald killing JFK. Then you see his ever-evolving-role advisor Paul Manafort saying, “When he’s out on the stage, when he’s talking about the kinds of things he’s talking about on the stump, he’s projecting an image that’s for that purpose.” This recalls the famous “etch-a-sketch” comment made by a Romney adviser during the 2012 campaign: “I think you hit a reset button for the fall campaign. Everything changes. It’s almost like an Etch-a-Sketch. You can kind of shake it up, and we start all over again.” That gets me concerned about where Trump then actually stands on issues, but I’ll get to that topic in a subsequent installment.

I gave Trump a chance to be my candidate when he announced while several of my other friends immediately wrote him off or decided to plug their ears and go “la-la-la”. However his continued over-the-top remarks, evolving opinions, and baseless statements pushed me into the #NeverTrump camp around Thanksgiving 2015…just in time to chat about it with the family.

In the next part, I’ll address Donald Trump on the issues.