Disclaimer: The views, opinions, positions or strategies expressed by the author and those providing comments are theirs alone, and do not necessarily reflect the opinions, beliefs and viewpoints of The Oakland Journal. 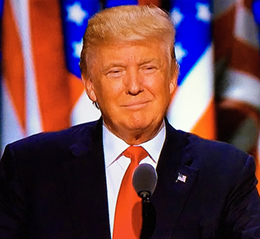 Like all politicians, Donald Trump manages to garner both support and criticism from either side of the political aisle. As expected, Democrats have thrown the kitchen sink at him, including accusations of being bigoted, racist, homophobic, xenophobic, and misogynistic. Essentially, they have found a name to call him in response to every statement he’s made while also accusing him of name-calling in the process. But that really shouldn’t be a surprise to anyone who is familiar with electoral politics. What has been more of a surprise is the way some Republicans have turned against their party’s nominee, and this resistance to Trump is likely coming for one of two reasons: either 1) Republicans are spending too much time exposed to liberal media that picks and chooses quotes and facial expressions that push their agenda without showing the full context of Trump’s statements or 2) Republicans have forgotten what it means to be a Republican.

The Libertarian Party hit the nail on the head with their claims that present-day Democrats want to regulate your business and Republicans want to regulate your bedroom. The Republican Party, from Lincoln to Reagan, has historically been based on freedom. Wanting to keep government out of your life is the staple of being republican, but that set of beliefs has been shoved to the corner where Ron and Rand Paul hopelessly try to remind neo-conservatives where the party started. Unfortunately, these neo-cons have slowly strayed farther and farther away from what once made the party great. Nowadays, Democrats try to raise taxes, regulate banks, and blame big money for all of the country’s problems, and, until this election cycle, Republicans wanted to force everyone to live by their set of values and lose all sense of individuality. Fortunately, Donald Trump has no interest in falling into either of those destructive groups. Instead, he supports tax breaks and deregulation of big businesses to stimulate economic growth while also supporting a state’s right to choose its policies on issues such as marijuana legalization and education. The best of both worlds.

Nothing epitomized rejection of this old, stale, and close-minded way of thinking better than when Ted Cruz was booed from the stage at the Republican National Convention. The delegates and other attendees rejected his outdated way of thinking. They showed that they will no longer settle for politicians who refuse to open their minds to the constantly evolving world in which we live. They will support Donald J. Trump.

Trump has rightfully given up on trying to convince hypocritical Democrats to join his cause. By hypocritical Democrats, I am referring to the ones who call Trump a racist bigot and then make fun of Melania Trump for her accent. The ones who call Trump corrupt yet support a should-be felon. The ones who call Trump a sexist but support a candidate who shamed her husband’s mistress while she was First Lady rather than standing up for her fellow woman who was wrongfully dismissed from the White House after telling the country about Bill Clinton’s serious flaws. They support that same Bill Clinton to live in the White House for the next four years. However, the Donald can still try to sway the minds of the undecided voters who see Hillary’s track record of lies and deceit. The voters who see that we don’t need to vote for her just because she’s been in politics before. Experience does not imply competence, and it certainly doesn’t for Clinton.

Americans have now been presented with two strong choices for the leader of the free world, and no, neither of them is named Clinton. Gary Johnson is the Libertarian Party nominee for President, and he represents a party that carries on the ideology that made the United States a great nation. An ideology consisting of freedom, not big government. However, Johnson does not have a legitimate chance without a miracle in the Electoral College, but Donald Trump does. Donald Trump is the quintessence of what a Republican should be today. He stands strong against terror; he supports the police officers who keep this country safe; he refuses to be satisfied with poor trade deals and out-of-control debt. Additionally, he stands for the rights of all Americans. He stands for LGBTQ rights; he stands for our right to bear arms to defend ourselves from criminals and keep the government in check; he supports the rights of individual states to govern themselves with laws that speak to the wishes and values of their people. He supports your right to live in a country that is great. That is why Donald Trump will Make America Great Again.