Home » Features » The Unauthorized Biography of the Founder of Oakland David C. Bush

The Unauthorized Biography of the Founder of Oakland David C. Bush
By Kevin Heffernan 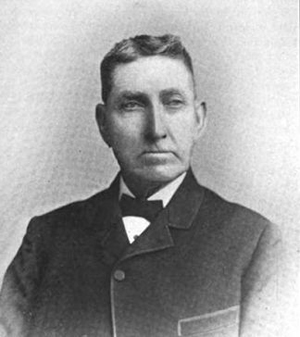 It may be that many in Oakland have heard of David C. Bush and it’s probably that most might even be aware of Bush Plaza adjacent to the railroad tracks in town. But it’s a good wager to suggest that most do not know of his contributions to community and, equally, that this community would likely not exist were it not for him. He was, in my opinion, the true father of Oakland.

But who was David C. Bush, who is this man standing tallest amongst all Oakland men, where did he come from and what feats did he accomplish to deserve this title?

Mr. Bush was born in 1827 on the family homestead in Mahwah and was among the second generation of American born. His father, Peter, served in the American Revolution while his grandfather, Samuel, arrived from Holland to settle in Mahwah as a blacksmith and as one manufactured cowbells.

David C. Bush Arrives in Oakland
In 1848 at the age of 21 the young David C. Bush married Miss Anna Van Blarcom whose family lived in what is now Oakland. The Van Blarcom family was a major land owner in central Oakland and the owner of many slaves. Indeed, the Van Blarcom and the Bush families were then related by marriage as William Van Blarcom married Abrigail Bush in the 1820’s. But then again, everybody was related by marriage to everyone in those days. They were also originally from Mahwah prior to taking up both residence and opportunity in our glorious village in about 1800. The current 410 Building in Oakland was once owned by the Van Blarcom family, was the Oakland Post Office and the first Oakland Library and was also once the Van Blarcom Hotel. He became by extension and by inheritance a slave owner as well.

While Mr. Bush moved from Mahwah with his bride in 1852, history does not record the reasons for his move from Mahwah. Regardless of reasons, Oakland has benefited mightily since.

Initially, Mr. Bush confined his interests to farming and apparently either purchased or inherited from the Van Blarcoms large tracts of land in the center of town. During the period immediately following the Civil War there was a railroad building craze in Bergen County and in America as a whole. And during that same period, Mr. Bush was also a Bergen County Freeholder and for 7 years a Franklin Township Committeeman which besides being a feat itself given voting laws at the time, also provided him with the insights and plans for the railroads in the county. The iron horse was the future to build and connect America. This fact was not lost on the mind and vision of David C. Bush. He and his adopted community had to be part of it.

Bringing the Railroad to Oakland 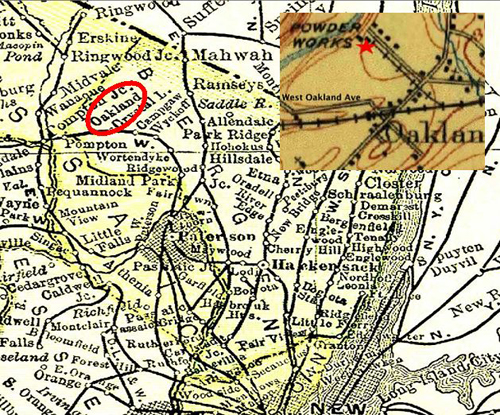 David C. Bush became a member of the Board of Directors of the New Jersey Western Railroad, the most successful of those emanating from the ports of New Jersey. Its routes ran from Peterson and Hawthorne westward and connect with all other major and minor railroad lines at the time. Once on the Board, he had influence to direct portions of the westward route. And having a train stop in Oakland was his primary objective as he knew that such an accomplishment would certainly, figuratively and literally, place Oakland on the map unlike any other civic accomplishment. He ultimately also became an investor in the railroad thereby placing his personal fortune at risk for the sake of his community, not to mention his potential personal financial gain. 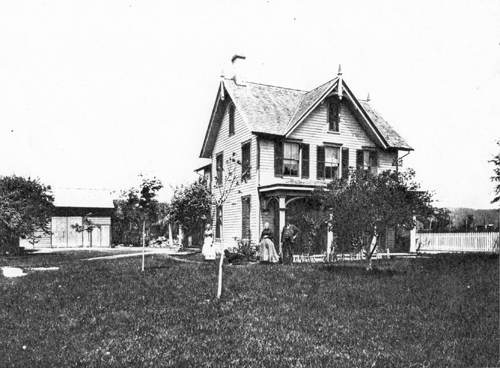 His dream was realized in 1869 when the first tracks were laid through the farmlands of Oakland. More specifically, the railroad tracks were literally laid through his own farm which then surrounded both sides of RVR road. The very first train to pass through Oakland was on May 1, 1870 and it did so with great fanfare among over 400 witnesses augmented by several barrels of local hard cider.

In the same year in 1869, David C. Bush built his farmhouse on the property and location that now contains the Walgreen’s Drug Store. His farmhouse contained a ticket office prior to the erection of the Oakland train station and it also served as Oakland’s first post office with him as the post master for 16 years.

But what’s a railroad in town without a railroad station? Again, David C. Bush steps up to the civic plate in 1872 and donates land to place a railroad station in our community. It is said that he funded the materials for its construction and that it was built by the donated labor of Oakland citizens. Ultimately, the railroad station property was donated to our town with a very mixed set of implications and consequences. 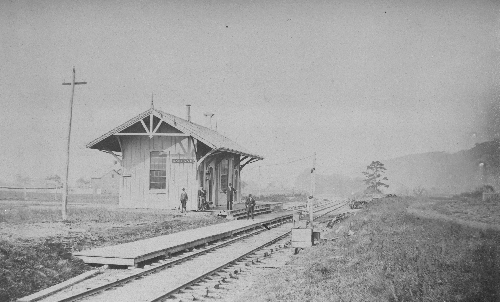 The Dawn of the Wigwam
In 1887 Mr. Bush built the first (and for the longest time, only) commercial building in Oakland, the Bush General Store. It sold or ordered everything that Oaklanders needed but couldn’t either make or grow themselves. That building  ultimately became THE WIGWAM, the singularly most iconic structure in Oakland for an entire generation. On May 7, 1867 Mr. Bush married Jemima Van Houghten, a widow, after the passing of his first wife in 1866. As the fates would have it, his son, David C. Bush, Jr. and her son by a previous marriage, W.H. Stuart, would ultimately join forces to co-own the store as it became the Bush – Stuart General store. 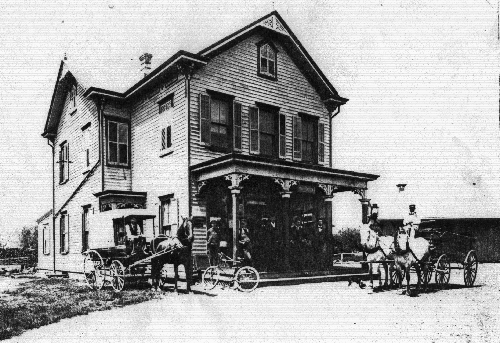 But his involvement and contribution to Oakland didn’t end there. Mr. Bush always knew that the railroad would connect Oakland with the rest of the world and, in addition, bring people, business and industry to Oakland. In 1890 it did just that when he sold a critical piece of land to the American E.C. Powder Company for the establishment of its factory on the west side town near what is now Lake Shore Drive. He also sold and built a railroad spur to the factory. That spur started several hundred yards up on the east side of RVR and crossed RVR approximately where the Rt. 287 overpass is now situated. 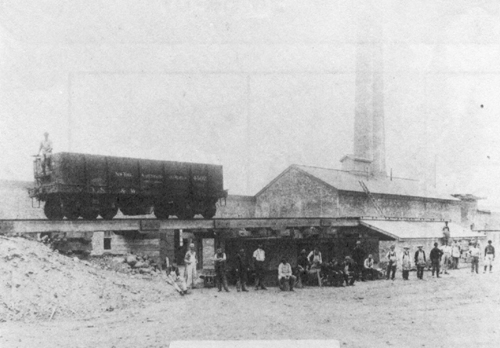 Leading the Charge for Independence
And, finally supporting that Mr. David C. Bush was the true father of Oakland is the simple fact that it he who led the charge to secede from Franklin Township to form this community in 1902 and it was he who named this town as Oakland. In 1902 immediately following the secession of Oakland from Franklin Township, the leaders of this community were confronted with the huge task of naming this now liberated land. After the approval of secession by the NJ Legislature, a meeting was held over a barrel of hard cider in the Bush Stuart store to decide the name of this town. While Bushville led many names that were offered, Mr. David C. Bush simply rose and said that it should be called Oakland. And so it was, so it is and such was Mr. David C. Bush.

Even after the all of his contributions to this community since 1852, he was not done. The year was 1910 and Oakland needed a fire department. An informal group had formed to organize it but needed land upon which to construct a firehouse. Mr. Bush stepped up yet again to provide it. It was his last contribution to Oakland as he died in 1911.

We Live His Summary
While this writer is tempted to add ‘In summary’, one cannot as truly nothing in this great little town of ours would be or hasn’t been touched directly or indirectly by David C. Bush. The Wigwam is our Independence Hall and Mr. Bush is our personal George Washington who fought against all odds to make us independent. There is no ‘summary’ as we Oaklanders are living his contributions to this village. And yet to many, he is virtually unknown. Cannot this community which owes so much to David C. Bush do better than to honor his name with a small, inconsequential piece of land as Bush Plaza? We can and we should do better than that!

3 thoughts on “The Unauthorized Biography of the Founder of Oakland David C. Bush”