On July 10th, The Oakland Journal was contacted by a person representing himself as a member of the Oakland Police Department’s detective division; and,  as the call originated with an ID indicating it was a Borough of Oakland phone number, The Journal assumed the authenticity of the caller.

The caller inquired as to what was the source of the information related to the op-ed below.

As the op-ed relied on a televised re-broadcast of an Oakland Borough council meeting two weeks ago, and no confidential sources were at risk, The Journal immediately cooperated by complying with the request. 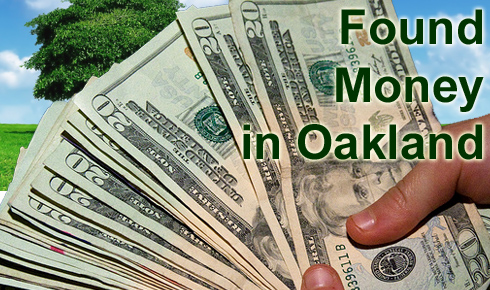 Money has been found in Oakland, approximately $5,700.

If you have lost a large sum of money, please do not try and claim this found money; but, you can offer suggestions on how to spend it.

The $5,700 is “found money” in the sense that it has fallen into the lap of the Oakland borough council, and they are looking for ideas as to how it should be spent – with some parameters attached.

The funds originally belonged to the Oakland Chamber of Commerce, which most recently existed in name only, and eventually ceased to exist entirely. For whatever reason, the Chamber had been using the Oakland municipal tax identification number instead of their own – and so it appears that the Borough of Oakland will be declared the “next of kin” and take possession of the money.

The council discussed at their last meeting what might be done with the money.

Council member Jensen suggested the funds could be put towards the Pleasureland property where trails, a great lawn, dog park and band shell are being proposed. Mayor Schwager offered that the deceased chamber of commerce previously used the funds for advertisements and scholarships; and, council member Visconti suggested getting input from the old members as the money was raised from them.

If Oakland residents want to throw in their 2 cents on how to spend the $5,700 in found money, now is the time to do it.

Council member Jensen’s suggestion to earmark the funds for Pleasureland, which has a working title of Great Oak Park, was discarded during the council meeting because it was not believed to be in the “spirit” of the deceased chamber; which is not really a fair assessment.

Utilizing the funds to realize the plans for Pleaureland – or perhaps more appropriately the Raymond Property across from Oakland First Aid, is a legitimate use of these funds. The plans for Pleasureland will be a great asset for Oakland and add to the vibrancy of the whole community.

The Raymond Property, which is on Ramapo Valley Road and closer to the business district, is also in need of maintenance and development so that it can be enjoyed…In terms of scale, an investment in the property on Route 202 would show an immediate improvement to the face of Oakland and provide more immediate, tangential benefit to Oakland businesses. It is a smaller physical space, and $5,700 is a substantial amount in that regard.

While Mayor Schwager offered during the meeting that the old chamber of commerce had given scholarships, she did not necessarily suggest that’s how the money should be used- which is probably a good idea. Peaches and cream is not a trademark of politics in Oakland, and the borough council dispensing scholarships is a recipe for partisan politics.

Council member Visconti wanting to reach out to previous members of the deceased chamber is courteous, but not pragmatic. The demise of Oakland’s original chamber of commerce came about through neglect – there was no leadership, no one cared, and they had not been active for years before finally being dissolved. It’s a courteous gesture, but the 2 cents of any previous chamber member is worth the same 2 cents as any resident of Oakland.

There was no suggestion by any council member that the funds be transferred to the new Oakland Community of Commerce- which would be the logical heir to the funds. This is an organization with bylaws, elected officers, and a membership role consisting of dozens of businesses paying dues.

The fact that this Oakland organization was not suggested at all is probably due to the fact that the Community of Commerce is headed by Peter Kikot  – who is running for borough council.

The new COC may not be the correct choice to receive these funds, but it merits discussion. Perhaps it was an oversight by the council, but more likely it is symptomatic of when the veneer of civility in Oakland causes mental constipation.

This leaves the Oakland borough council looking for 2 cents from anyone willing to spare it.

It’s reasonable that this found money be used for Pleasureland, the Raymond Property, or even the walking path at the Rec Fields. These are not projects related to advertising businesses, but they promote the social character of Oakland and in turn benefit the business community.

There is one area that would benefit the most from investment, and that is the corner of Yawpo and Ramapo Valley Road – the central business district. $5,700 will not help the traffic there, but it could make a difference in what you look at while in traffic.

Except for this one cluster corner where highways converge into Oakland, most of Oakland is pretty nice to drive through. It looks nice, it looks average, it looks like home….but the cluster corner of Route 287, Yawpo, and Ramapo Valley Road looks like a mish-mosh of cars, wires, roads, and barriers. Spending the money to improve the cosmetics of this location is a worthy investment.

The borough council could come up with a plan unilaterally, or perhaps seek proposals for $200 to $1000 grants aimed at beautification. It might be that landscapers, artists, boy scouts, girl scouts, school groups, or civic groups have the initiative to make something great happen. But in either event, it is an opportunity to make the town more attractive for both residents and business….and that is the true spirit of a local chamber of commerce.

Every town collects taxes, but what makes Oakland special is the amount of sweat equity that goes into it….From the school PTOs, to Rec, to the civic organizations, and all the municipal commissions and committees….. A little bit of money and a lot of sweat can create something amazing.

This proposal, these 2 cents, is to turn the “found money” into “seed money”, and see what grows.

11 thoughts on “Found Money in Oakland-UPDATED”