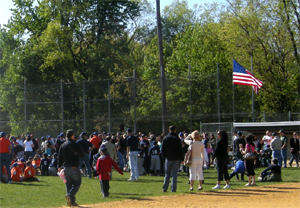 The Rec Commission is once again running at full capacity with a Chair, Vice-Chair and Treasurer.

At the January 16 Rec Commission reorganization meeting Mike Guadagnino was elected Chair 6 votes to 1 with King voting no.  Unanimously elected were Bob Scalabrini as Vice-Chair and Neil Malmud, who remains Treasurer. The 3 officers are the only ones on the commission with more than 1 year experience. The new chair referred to the 2012 commission as “a very ‘young’ commission”.

When contacted,  Guadagnino  was asked  if he was going to call his absence from the 2011 season a mulligan.  He laughed and responded  “As for a mulligan, I don’t play golf.  I see last year as a chance for me to re-charge my batteries after completing a 5 year term.”

Since Wrestling and Softball signups are  in full swing and have been running without a commissioner, Vivian King was assigned wrestling commissioner and Dan Logatto was assigned softball commissioner until he makes his official appointments at the January 30th meeting. John Hickey was also named Recreation Website director.

Guadagnino also initiated a review of the bylaws as they were not compliant with the borough’s ordinances. The commission went through the items in question and after a committee was assembled will report back with amendments at the next meeting for full commission approval

One thought on “Rec Commission at Full Capacity”