Home » OaklandNJ » A Trip Down The Ramapo

“Twenty years from now you will be more disappointed by the things that you didn’t do than by the ones you did do.”– Mark Twain

The Ramapo River made headlines in the aftermath of Hurricane Irene in 2011 as high waters washed over bridges and destroyed homes.

The river continues to attract the attention of environmentalists, homeowners, and municipalities as new challenges and solutions get discussed concerning the river’s health in NY & NJ.

In Oakland, the issue of flooding and erosion are center stage as the town returns to a problem first reported in The Record back in 2007. Five years later, the situation has become even more critical as the erosion of bluffs along one section of the river continue to fall into the river.

The most recent public discussion was brought to the fore front again in the spring of 2011 as huge chunks of land, trees, and debris fell into the river due to the banks erosion. The situation remains tenuous with signs posted warning of falling rocks, sheds & decks on the verge of crashing down the embankment, and the health of the river endangered by more sediment filling the already shallow waters.

Oakland, like many surrounding municipalities, is faced with taking direct action themselves to preserve the health of the river. A recent river clean-up led by the Oakland CERT team resulted in numerous dumpsters full of debris being pulled from the river, and the length of the Ramapo in Oakland is now mostly clear of garbage and debris.

In Mahwah, the first two weeks of June are the focus of an Eagle Scout project intended to clean-up the Mahwah portion of the Ramapo River; and, volunteers are still welcome to participate. 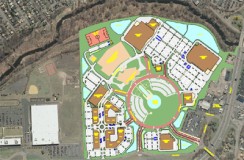 The Mahwah clean-up is a grassroots effort to preserve the Ramapo River, but other developments in Mahwah could exacerbate the pollution and flooding issues in both Mahwah and Oakland.

The Mahwah Crossroads project, proposed for the old Ford site, is seeking final approval for a lifestyle center mall that will border the Ramapo River. An environmental impact study conducted by students at Ramapo College raise concerns that many residents and environmentalists have asserted are obvious – flooding will worsen.

Pompton Lakes has moved forward with their own projects to address the health of the river and mitigate the flooding and erosion problems facing their residents. They received $87,500 from the New Jersey Department of Environmental Protection (DEP) to make repairs and remove silt deposits that increase the potential for flooding. Wayne and Pequannock also received DEP funds.

While individual communities move independently to protect their local shores, regional efforts are only beginning to take shape. In contrast to the well received environmental impact study conducted by Ramapo College, a William Patterson Symposium received a lackluster response from officials who had hoped to formulate a plan of action rather than rehashing a history lesson on the river.

The Rockland-Bergen Bi-state Watershed Commission recently was approved by the NY Assembly, and the bi-state effort may eventually lead to greater consistency and cooperation between NY & NJ. The 12-member commission will seek to coordinate flood control efforts between Rockland and Bergen counties with commission members being appointed from both sides of the border.

The Bi-state Commission should prove helpful in coordinating any future disasters like the damn break in Arden, NY, and potential disasters related to a mulching facility in Tuxedo, NY – where an oil spill originated during the Hurricane Irene dam break –. Tuxedo is paying off a a $66,000 fine the NY DEP imposed due to deficiencies in the mulching facility operation. It is suspected that the plant is responsible for hundreds of dead fish, and concerns that even more wildlife could be endangered, and/or impact the drinking water of New Jersey residents downstream.

A new wrinkle being added to the woes of the Ramapo River involve proposals to pump water out of the river to supplement the Wanaque Reservoir. Environmentalists have raised concerns that drought-like conditions could result in Ramapo and Pompton rivers by over-pumping in the Wanaque Reservoir.

In addition, local fishing enthusiasts have expressed concerns that efforts like this can have serious implications for the local ecosystem and fish population as it leads to abnormally high water temperatures.

The Oakland town council is continuing to debate whether to begin independent remediation efforts proposed by the borough engineer Boswell. In two presentations before the town council Boswell representatives described the short-term and long-term options available to the town.

Describing the erosion situation in Oakland as the most severe in the county, Boswell proffered a full remediation plan, and tendered what was described as a staged solution that would allow the town to utilize a $175,000 grant that must be spent or lost.

The full remediation would include more extensive work beyond stabilizing the cliff erosion evident in the accompanying video, and would address dredging parts of the river which should alleviate some nuisance flooding experienced by residents along the river.

3 thoughts on “A Trip Down The Ramapo”