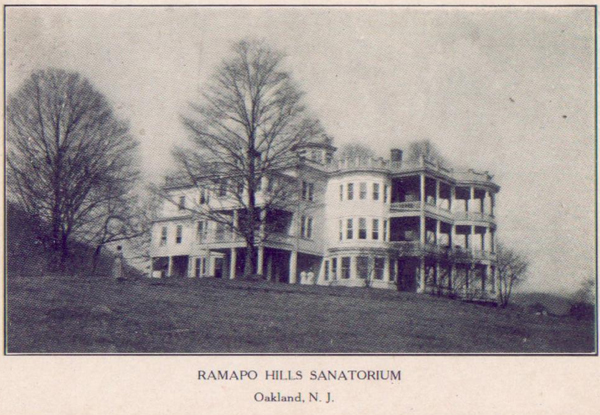 This is that time of the year for Oakland to celebrate the establishment of the Ramapo Hills Sanatorium with a parade, a proclamation and fireworks. As a point of fact it officially opened its doors to the relatively well- heeled but fatigued paying public on October 9, 1909, a mere 108 years ago.

What? You never heard of it? Well, you are in good company as neither have 99.999% of current Oaklanders. What was it, who founded it, where was it and what happened to it? All great questions that I’ll attempt to answer here. Here’s a hint: If you have ever been in the parking lot of Shop Rite, you have walked among the benign ghosts of the Ramapo Hills Sanatorium. Yup, it’s true.

OK, let’s begin. A sanatorium is an institution for the medical care and recuperation as described in the 1909 promotional brochure for the Ramapo Hills Sanatorium. 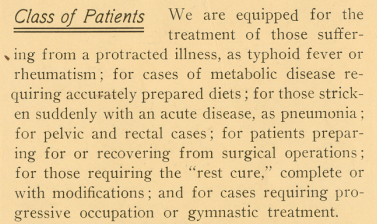 In other words, it’s a place for the care of the tired, weary and the ill, a place to rejuvenate and a place to heal for the well heeled. And in 1909, there was no better location than Oakland to do so with our sleepy, small town rural atmosphere, clean water, rolling hills and fresh air. Our population then was a mere 700 souls exclusive of cows, horses and a few hogs.

The facility was founded by the Clapp sisters, Bessie Elting L. Clapp and Edith J. Lawrence Clapp, RN. Edith was a 1902 graduate of the New York Presbyterian Hospital Nursing School. The official grand opening of the Ramapo Hills Sanatorium was on October 9, 1909. It was an occasion of great fanfare with many of the medical luminaries in attendance for promotional purposes. It is interesting to note that by 1913, the Ramapo Hills Sanatorium advertising in the Journal of Nervous and Mental Disease featured ‘The Misses Clapp in the Ramapo Hills’ as the headline and then went on to present the facility. This would suggest that the Clapp sisters were significant medically oriented personalities of the time in their own right with a highly recognizable name. Alternatively, they simply had massive egos.

The Ramapo Hills Sanatorium was a huge Victorian building situated where the current Oakland Shop Rite is now located. It had three stories and boasted of 30 rooms to accommodate 18 patients. Patients were charged either $35 or $75 per week depending upon the room type selected. While seemingly very inexpensive by today’s standards, it was a princely sum in 1909. 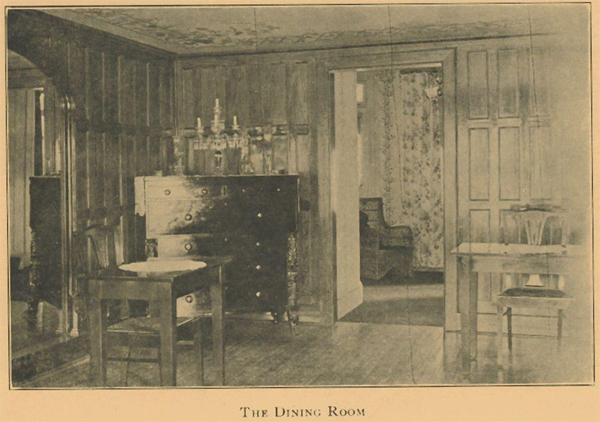 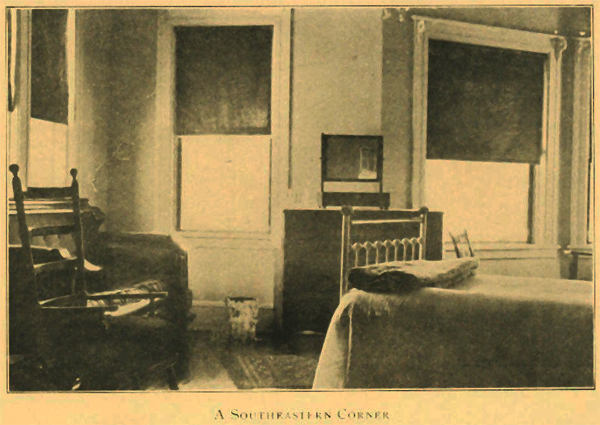 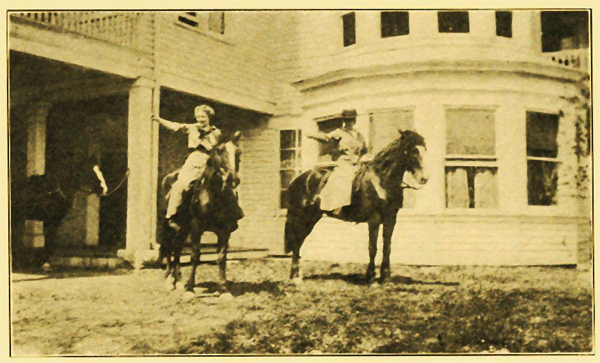 However, the Clapp sisters did not build it. Apparently they purchased it but who they purchase it from has been lost to history. Their brochure cites that the core of the Victorian structure was well over a century old when they acquired it. Subsequently, it was continually added to from a relatively humble stone structure on the hill until it reached its mammoth Victorian proportions of the day. This writer recalls reading decades ago that the stone core structure was originally owned by a member of the Bush family.

This approach was not unique in Oakland at the time. Indeed, Oakland during the Victorian era was a summer resort for the rich and famous from New York City. The main building of the Oakland Military Academy was a huge Victorian structure as well and whose core was a relatively modest sandstone building. In the 1880s it was purchased by the Calder family and was continually added on to in order to accommodate the constant stream of guests arriving for a visit. Another example is the Page estate that once encompassed over 900 acres of Oakland. The entirety of today’s Hiawatha Boulevard was its driveway leading to the main mansion on top of the hill.

Beyond providing first class facilities for the tired and the ill, the Sanatorium was very modern for the period. Specifically, the Sanatorium earned the distinction of having the first telephone in Oakland. It official phone number was Oakland 1. Additionally, the Sanatorium boasted of having an elevator, probably among the first, if not the first in Bergen County in 1909. One can be certain that our local farmers were duly impressed. And for some lost reason, Sanatorium appears to have a connection to Montclair, NJ as almost 40% of its professional and personal references are listed as living there. Montclair was and still is an economically preferable community.

Sometime between 1910 and 1920 the Ramapo Hills Sanatorium apparently went out of business. While the reason why it failed is not recorded. Edith Clapp, RN nonetheless remained active in nursing as she is recorded to attend the American Nursing Society in Montreal in 1920. 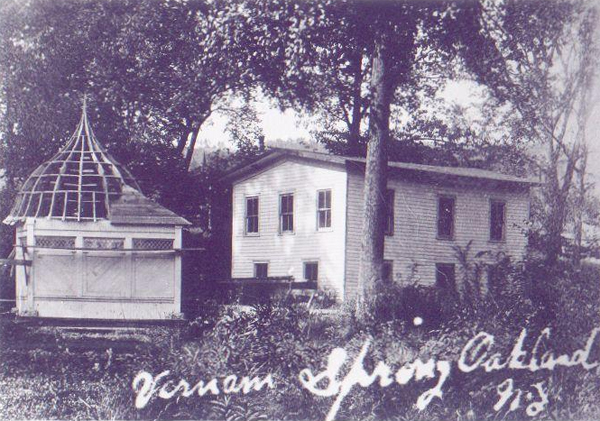 Mrs. Vernam, realizing the potential of Oakland’s fine spring water, acquired and developed Vernam Spring located in the woods between Grove Street and Long Hill Road. The remains of the spring structure can still be seen today. She subsequently sold the spring to the Kanouse Water Company which bottled Oakland’s fine water and sold it throughout the metro area. 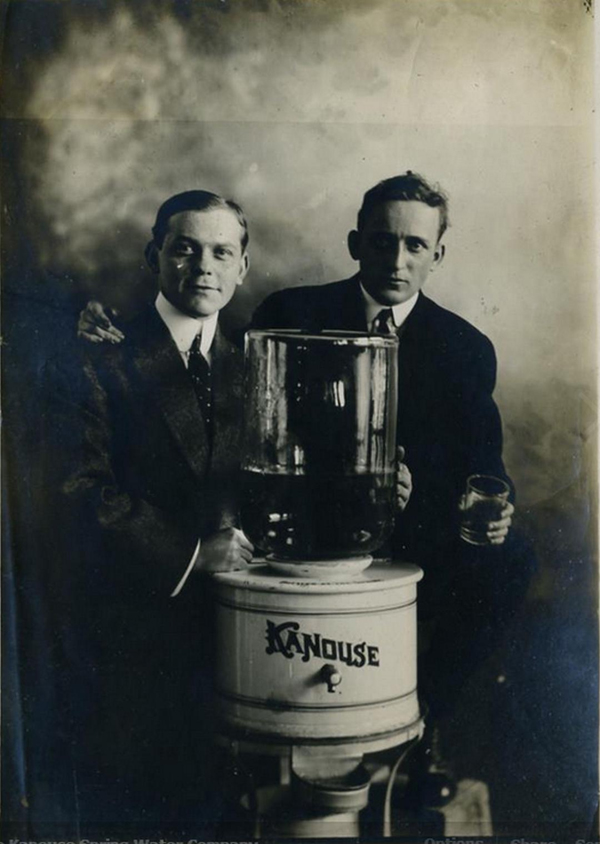 By the mid or late 1920s, Mr. Vernam passed away and their only son and heir died as an aviator in WWI in France. Without an heir to pass Lilac Manor to, Mrs. Vernam offered Lilac Manor to the Catholic Archdiocese of Newark as a seminary for aspiring priests. After review and inspection by the Bishop, the offer was politely and graciously declined. The building needed too much repair and upkeep for the intended gift.

The only remaining remnant of the Ramapo Hills Sanatorium is a small house immediately before the entrance to Shop Rite coming from the Oakland Diner. If you look closely, there is what appears to be a driveway adjacent to the house. That driveway originally extended up to the Sanatorium serving as its main entrance. Post Road, currently leading to the Shop Rite property, wouldn’t be created for another 65 years. But look quickly as the entire property is currently for sale and it is a very safe bet that the small, 100 plus year-old house will not survive into the future. 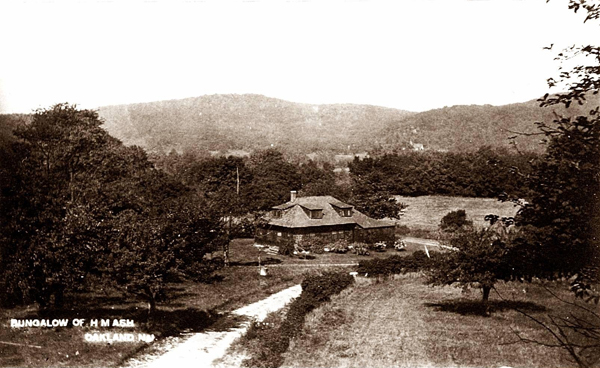 Very unfortunately that’s where our story ends. This writer has attempted for decades to determine what subsequently happened to Lilac Manor. Why was it destroyed and when? Was it used for OVFD practice of simply destroyed with its ultimate sale to new owners? The owners of the Shop Rite, which opened in 1976, tell me that in 1974 the location was simply a vacant hill. So, how and when it became devoid of a grand Victorian mansion remains a mystery. 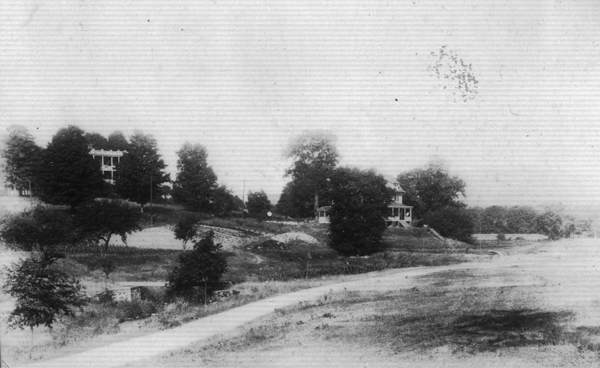 Can anyone shed any light on the destruction of Lilac Manor? When, why and by whom?