Home » Local Events » The Point Being 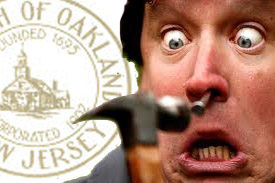 The Oakland Budget meetings are now on television, and no one is doing anything to stop it.

The meetings are being broadcast in an effort to….well, for reasons yet to be defined. But there have been numerous untold consequences.

One unconfirmed report concerns a man who was watching the Oakland budget meeting during dinner, fell asleep, and nearly drowned in his soup.

Another report involves an elderly woman who had fallen and could not get up; she suffered through the majority of the meeting unable to lower the volume or change the channel.

In the most tragic case, a local resident was watching the Oakland budget meeting on television, stood up and declared, “I’d rather hammer a nail up my nose than watch this!”… And then he actually drove a nail up his nose. The man’s condition is now considered stable, and the family has disconnected the cable TV box.

Residents are now being warned against looking directly into the television set while watching the Oakland budget meeting, but it’s considered safe if proper safety precautions are taken.

Experts suggest that viewers simultaneously read a book, do a crossword puzzle, sort socks, and floss their teeth – all at the same time. Research has shown that intense multi-tasking of this nature limits the potential for a negative reaction from watching the Oakland budget meeting.

While broadcasting the budget meetings serves some purpose, no one is actually sure what that purpose is; and, the toll in human tragedy is expected to rise.

The proposed budget is only available online by clicking here. Residents can go and get a hard copy of the budget at town hall, but only if they have nothing else to do between the hours of 8:30am and 4:30pm Monday through Friday.

If they are fortunate enough to have something better to do, like go to work, than the only copy is here  – http://theoaklandjournal.com/local-events/budget-hearing-schedule/

The department heads at the budget meetings seem to follow a protocol that it’s impolite to mention any large dollar figures, so they are usually not mentioned. Talking about money, whether at a cocktail party or a budget meeting, can often be construed as crude or boorish – the Oakland budget meetings tend to avoid those ‘disturbing’ subjects.

The most recent Oakland Budget Meeting show featured guest stars from the Department of Public Works and the Oakland Police Department.

The DPW budget is broken down into a variety of divisions that include Streets&Roads, Buildings&Grounds, and Snow Removal among the main components. For a 19 employee workforce, plus some bosses, plus some seasonal workers, this department budget comes to about $1,263,000 for Salaries & Expenses – not inclusive of the garbage collection which is outsourced.

The DPW is also responsible for the municipal water and sewer systems which have separate budgets. This part of the discussion was interesting in that it offered some insight into what is meant by “stabilizing taxes”.

Basically, it appears that the concept of “stabilizing taxes” is more about perception than reality. If, as was discussed at the meeting, rates were lowered, then next year they may have to go higher…that’s unstable. It’s best if taxes, rates and fees always go higher…. for stability.

With ‘tax stabilization’ in place, residents see their bills/taxes and say, “Oh my God, not again…”

There were a couple of odd statements during the DPW budget presentation. One concerned an employee that apparently works seven days a week, which seemed to be a harsh schedule.

The other involved the expected overtime charges for snow removal which was relatively low considering the average number of snow storms over the past several years. The overtime total for a season of average snow storms is expected to cost the town about $25,000.(Oakland, NJ has the best roads in a snow storm)

These oddities were followed by the presentation of the Police Department budget which is expected to break the 4 million dollar mark in 2012 – for a total of $4,054,990 in Salaries & Expenses. To celebrate this historic milestone in Oakland history, the council had planned to have cake and coffee at the budget meeting, but they could not afford it.

With salaries and wages for the Oakland PD ringing in at $3,925,800, the Oakland Chief of Police made a point of targeting the Oakland dispatchers for imposing a financially unsound contract -specifically regarding their overtime. But to maintain a civil ambiance during the budget meeting, the Oakland town council members neither laughed at the irony, nor cringed at the hypocrisy of the police chief.

While the Oakland Police Chief highlighted fiscal concerns over the dispatchers, there was no mention of the overtime charged annually by police officers. It may have been a number too big to discuss in polite company and, so as not to appear crude or boorish, the chief avoided it.

No member of the council mentioned the cost of police overtime either; but, like many Oakland residents, they may have fallen asleep during their budget meeting.

Other points covered during the police budget presentation covered printing costs, vehicle purchases, and IT services for the Oakland police.

Budget meetings can be boring, which is why Jon Petz wrote a book entitled Boring Meetings Suck. In the video below, Petz offers some concise advice on how to have a meeting that does not suck.  One main point to address is, “Why are you having this meeting?”

2 thoughts on “The Point Being”