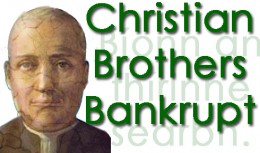 Mostly known for their excellence in education and their ability to excel in sports, two NJ Catholic high schools are entangled in the bankruptcy proceedings of the Christian Brothers.

Originally known as the Irish Christian Brothers, the religious order has established numerous educational facilities in New York and New Jersey, around the nation, and the globe.

The bankruptcy proceeding of the Christian Brothers originates with allegations in the United States, Canada, Australia and Ireland concerning abuse that stretched over decades.

The religious order was founded by Edmund Ignatius Rice who was a wealthy import and export trader in the city of Waterford, Ireland. He settled his business affairs in 1800, his most profitable year, and two years later opened his first school.

The students, in a surpise change from today’s structure, were graded by ability, not age.  He also demanded that there should be no physical punishment, which he found contrary to his own understanding of Christianity.  In 1820 he wrote, “Unless for some faults which rarely occur, corporal punishment is never inflicted”.

It appears now that there are numerous cases where the Christian Brothers allowed and then covered-up cases of both physcial and sexual abuse at various high schools.

Locally, in NJ, this bankruptcy implicates Bergen Catholic and Essex Catholic where allegations of misconduct have been made public by former students of the accused.

In Bergen Catholic, Brother Charles Irwin has been the target of several allegations regarding both physical and sexual abuse; he served in no less than thirteen different schools. Allegations of abuse during his tenure at Bergen Catholic during the 1960s is covered on the website BergenCatholicAbuse.com .

Bergen Catholic was also the temporary sanctuary for Brother Thomas Cuthbert Ford who taught math. He was at the time seeking refuge from charges in Canada. When discovered, he fought extradition from New Jersey, but eventually returned to Canada in 2000 and pled guilty to beating a 14 year old boy unconcious in a shower.

In Essex Catholic High School, Br. Jerome A. Heustis has been targeted with allegations of sexual abuse and it’s implications regarding the victim’s suicide at the time.

The majority of cases center on the 1950s, 1960s and 1970s, in a scandal that stretches the globe. The most entrenched pattern of abuses have been well documented in Ireland where the religious order operated many schools and orphanges. The abuses in Ireland have led to serious diplomatic tensions with the Vatican, and the religious order has agreed to compensate victims.

As part of the bankruptcy proceedings in America, former students of Bergen Catholic have been notified that they have until August 1st, 2012 to file a claim alleging physical or sexual abuse. These notifications have been sent by both the school and by firms representing victims.

In a letter dated February 2012, Bergen Catholic advised alumni of the matter and identified the claimant’s agent as Omni Management.

“Indeed, there are few matters I wish to urge with greater insistence upon the attention of the Brothers and especially of the young Brothers, than the evil done by the use of injudicious punishment when correcting faults of their pupils.

Corporal punishment is always degrading, and is more or less so according to the nature of the corrective used. Apart from the physical pain endured, the child’s nature shrinks from the shame which its infliction inspires; the boy’s incipient manhood revolts against it. Given in excess or when undeserved, it does harm which runs through a whole lifetime; it is never forgotten and sometimes never forgiven. The remembrance of such punishment sinks into the retentive memory of childhood, and there remains in clear outline and with every aggravating detail, when even the wrongs of after years have been well nigh forgotten……

He does far worse who punishes when punishment is not deserved, or exceeds what the child’s own consciousness of justice tells him should not be overstepped. Such chastisement is brooded over and resented as a wrong which, perhaps, even years of kindness may not entirely obliterate. Sometimes it does incalculable injury. Long after it is recalled with bitterness, and associated unhappily not merely with the teacher who inflicted it, but with religion itself.”