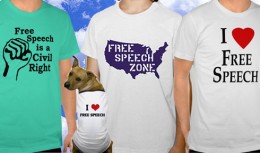 It is Free Speech week, a week that will go relatively unnoticed but should not.

America honors it’s soldiers with Memorial Day and Veterans Day; honors the birth of the nation with July 4th celebrations; honors the workers of America with Labor Day; and gives thanks for innumerable blessings on Thanksgiving.

In an age when there is a gluttony of talk on “values”, perhaps a day when America stops her daily routine to reflect, celebrate, and bring to the forefront a greater respect for the values that define America is appropriate.

The national identity of the United States – our identity as a people – is built on the five pillars of the First Amendment.

“Congress shall make no law respecting an establishment of religion, or prohibiting the free exercise thereof; or abridging the freedom of speech, or of the press, or the right of the people peaceably to assemble, and to petition the government for redress of grievances.” 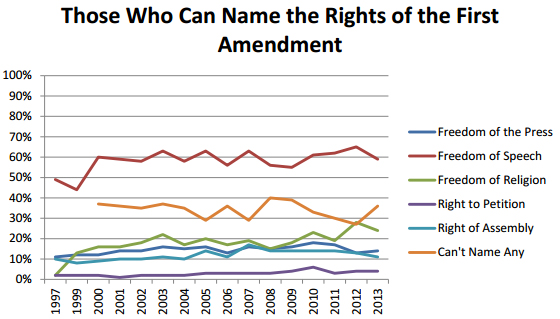 Parents of local school children are familiar with the Six Pillars of Character program that has been adopted by schools nationwide. These pillars are identified as trustworthiness, respect, responsibility, fairness, caring, citizenship – values traditionally instilled in the home rather than the classroom.

It is a common cycle in history that each generation insists on reinventing the wheel, and that sentiment can be attached to our present educational system that seeks to “teach” character.

The purpose of a public education – supported by public tax dollars – is primarily to produce good citizens; or, as Thomas Jefferson wrote, “I have indeed two great measures at heart, without which no republic can maintain itself in strength: 1. That of general education, to enable every man to judge for himself what will secure or endanger his freedom. 2. To divide every county into hundreds, of such size that all the children of each will be within reach of a central school in it.”

Perhaps the First Amendment, besides guaranteeing freedoms, can be the basis for instilling character in our children – and guaranteeing that our freedoms continue.

Here’s a DIY guide how the First Amendment can be used to teach character.

Congress shall make no law respecting an establishment of religion:
This is the first pillar because a person’s religion, their relationship with God, their belief system, is the most important part of who they are as a person – this must be respected. No one should ever experience injustice, prejudice, or be judged by others based on this most highly personal relationship. These beliefs are more important than friends, family or country – and so this is the first pillar.

The spirit of free speech means showing respect by listening to others and giving them the same respect we want.

Congress shall make no law…abridging the freedom…of the press:
In the old days, “freedom of the press” meant the written word. Men like Thomas Paine and Ben Franklin printed material that helped gain support for the American Revolution.

The written word is a powerful influence, and the emergence of the Internet has expanded the understanding of “freedom of the press” far beyond what our parents ever imagined.

Congress shall make no law…abridging…the right of the people peaceably to assemble:
From the days of the American Revolution, through the fight of women to vote, the protesters for civil rights and those against the Vietnam War. From the beginning, the right to peaceably assemble has played a major role in American history.

People are free to gather together to support a cause or to protest an injustice.

The key component here is peaceful, like Martin Luther King, like Elizabeth Cady Stanton…those brave enough to put themselves on the line.

Petition means not only to collect signatures, but to advocate, make your case, explain your reasons – try and convince others that what you believe makes sense.

Here are some ideas from the website Free Speech Week.org on how to honor and/or celebrate our right to free speech:

One thought on “Pillars of Freedom”