Home » OaklandNJ » The Debate That Wasn’t 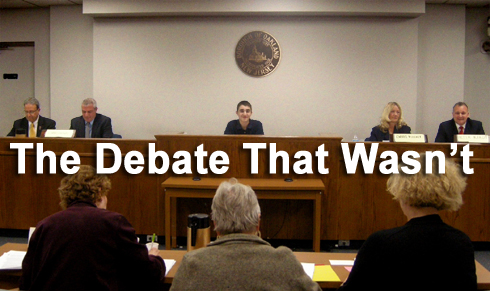 With only 45 minutes allotted for the debate itself, the “blame game” did not stretch back to the Native Americans; but, as the wooden sign in the council chambers clearly reminds us, “Once there was Indians all over this place”. Unfortunately, the Native Americans are gone, and they cannot be blamed for our taxes or our grammar.

The recent debate on October 22nd, 2012, was moderated by Minna Greenberg of the League of Women Voters. The tradition of the LOWV moderating local debates is a common occurrence that continues to provide the organization with visibility in the 21st century.

The debate in Oakland, covered in detail by Oakland’s local Patch.com, offered a taste of the candidates – but not allowing for much meat to be digested.

Local Democrats focused on their commitment to continue the Schwager administration’s progress in addressing many neglected issues; and the incumbent Republicans emphasized their establishment of local trusts used to stabilize fluctuations in borough expenditures.

As mentioned previously in Debating the Debates, the role of moderator was a sticking point that was finally agreed on when Democrats capitulated to last minute Republican demands to have the League of Women Voters send a moderator. Originally, in the summer, the Democrats had proposed having local resident Ryan Schwertfeger moderate the debate.

The recent debate, while giving a flavor for the candidates, was lacking in many regards. Of the six questions asked, one had immediate relevancy, two of questionable  relevancy, one was the proverbial softball, and two of complete irrelevancy.

The League may believe that an Oakland resident cannot moderate an Oakland debate, but this is akin to saying that presidential debates should be moderated by a  citizen of Britain, Mexico, or perhaps Luxembourg. It’s undeniable that the LOWV provides a service, a paid service, but it does not necessarily lead to the best results.

Whether it was the last minute proposal to have The League act as moderator, whether it was The League’s inability to utilize various platforms for collecting questions besides the town website, or whether the moderator was simply uninformed about the issues facing Oakland — The debate was lacking any real meat.

The question concerning former mayor Szabo’s push to hire a full-time recreation director was an issue in last year’s campaign – not this year. It offered Democrats a chance to score points by rehashing the incident – which they chose not to do; and, it offered Republicans a chance to rewrite history – which they chose to do. But it is an irrelevant question in 2012, and an educated Oakland moderator would have recognized that fact.

The question of how the town council can protect small business from large business is another irrelevant question. Oakland long ago made decisions concerning “big box” stores, and those decisions were based on quality of life, not protectionism. It was a wasted question, and wasted precious time during a 45 minute debate.

The question of each candidate having experience working with large budgets might seem relevant, but marginal. Oakland has a well paid full-time Chief Financial Officer and a full-time, also well paid, Borough Administrator.

The idea that only candidates with experience in multi-million dollar budgets are qualified for sitting on the Oakland town council certainly limits the pool of potential candidates at a time when innovation is sorely needed to maintain an affordable government.

It did give the Democrats an opportunity to describe their experience working on multi-million dollar school budgets or multi-million dollar charity relief efforts; and, it gave the Republicans an opportunity to crow about their experience with interior design budgets and board of health budgets – but the value of the question is itself questionable.

Budgets are an important issue, but a question  about Oakland’s budget would have been more relevant. There was no question for specifics as to how to bring down spending in Oakland. Visconti made an effort in taking responsibility for Oakland’s budget over the last 6 years, and Kikot made an effort to list areas where spending can be decreased — but a better question might have led to better answers.

The question of how Oakland is utilizing it’s open space is relevant, but with a mere 45 minutes to debate pressing issues which seriously impact lives in Oakland –  the question has a questionable value.

Yes, there has been no plan created to give residents access to the vast tracts of open space that have cost Oakland close to $10,000,000 to purchase. Yes, it was an opportunity for Democrats to point to 10 years of inaction. But in economic times where the tax burden on residents is reaching critical mass, a moderator more educated on local affairs may have explored more pressing issues .

The first question concerning the top priorities facing Oakland was adequate, but a softball pitch lobbed over the center of the plate. It was the type of open ended question more suited for a grammar school essay subject than one meant to elicit some insight into the candidates…. The answer from everybody was taxes.

There’s nothing wrong with giving candidates an open ended question to ease them into the debate, but with only 45 minutes in total it was less than an inspired choice by the moderator.

The question concerning Oakland’s establishment of a housing authority was the most relevant, as it is an ongoing issue that impacts nearly $1,000,000 in municipal funds that are now subject to state seizure. The Democrats offered two distinct reasons for their opposition – ethical and legal considerations, and the Republicans offered their previously stated arguments.

The League of Women Voters offered very little to Oakland in how they chose questions and moderated this debate, and they also did little to bring relevancy to their most visible value which is hosting these local debates.

The Journal was clear in it’s support of local resident Ryan Schwertfeger being the moderator. While a registered Republican, his objectivity and fairness are well respected. His interest and involvement in promoting civic engagement in local politics has been unprecedented, and his involvement would have certainly led to a real debate on the issues and future of Oakland.

Oakland got a mediocre debate organized by a person with no knowledge of Oakland – but perhaps something is better than nothing.

This, unfortunately, is a pretty low standard. The LOWV might find more relevancy by seeking to engage our future leaders in a less patronizing manner, and give hope to the future that a better generation will heal the wounds brought on by partisan politics.

While other state chapters of the League of Women Voters seek avenues to engage, encourage, and involve the youth of America in the political process, the NJ chapter remains focused on issuing policy papers and moderating lackluster local debates.

Perhaps next year, in 2013, Oakland might have the debate that wasn’t.

The debate that wasn’t would have actively sought to engage as many residents of Oakland as possible to submit questions.

The debate that wasn’t would have utilized multiple avenues to collect questions online from the public.

The debate that wasn’t would have gotten public involvement by actively engaging residents at the post office, at the farmers’ market, and other locations in town.

The debate that wasn’t would have utilized online polling for questions.

The debate that wasn’t would have had a moderator that was knowledgeable, prepared, and undoubtedly more professional.

The debate that wasn’t would have been a real debate.

5 thoughts on “The Debate That Wasn’t”