Nancy Gibbs and Michael Duffy. The Presidents Club: Inside the World’s Most Exclusive Fraternity.
New York: Simon and Schuster, 2012.
As reviewed by Ted Odenwald 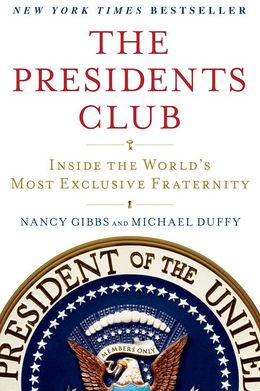 Only a person who has served as President of the United States can fully appreciate the challenges, the complexities, and the burdens of the office. The politician, cabinet member, influence peddler, and media commentator each has a limited understanding of the role of the nation’s leader and how that role influences that leader’s mind-set and performance. But the full spectrum of responsibility’s ramifications is clear to only  those few who have sat in the Oval Office — the Presidents Club, a small, informal group whose experiences, talents, and intelligence make each member a vital asset to the seated president. “Once they’ve been in the job, they are bound together by experience, by duty, by ambition, and by scar tissue.”

Gibbs and Duffy delve into the relationships of former and present presidents from Truman through Obama, revealing that while there is no such formal club, there are patterns of behavior that grow out of the “needs and chores of the sitting president, the needs and talents of the former presidents, and a climate that welcomes or deplores this partnership.” The Club’s ultimate objective has always been to protect the office of the president even if the sitting executive has fallen short morally and/or ethically. They empathize with each other. They are all “…fellow travelers in the parallel universe where past, present, and future blur, where the terrain of regret looks very different and where there is hardly ever such a thing as a perfect outcome. They are the jurors who will not pronounce a verdict, because they know that they have not heard all the evidence—and they are predisposed to be merciful.”

The Club began in the late 1940’s during the Truman administration; the United States needed to address the challenge of providing food for Europe in order to prevent a famine that threatened to claim more than 100 million lives. Following the suggestions of Congresswoman Clare Boothe Luce and Secretary of War Henry Stimson, Truman turned to a political enemy, Herbert Hoover, the former president who had been vilified by Democrats throughout the Roosevelt years for being responsible for the Great Depression. Truman’s needs and Hoover’s gifts were “perfectly matched.” Hoover had been President Wilson’s food czar during World War I; he “understood the scope of world hunger and the limits to how Truman could address [the problems].” Hoover represented Truman in Argentina in negotiations through which he was able to procure 5 ½ million tons of grain for Europe’s starving. “Together, [Truman and Hoover] broke through the red rape, defied the bureaucrats, wooed the dictators, moved a mountain or two,” thus preventing further “human catastrophe.”

Truman later asked Hoover to work on several key projects: a long-range study of Germany’s recovery from World War II; the development of several aspects of the Marshall Plan, designed to rebuild Europe and prevent the spread of communism; a proposal for the restructuring of the Executive Branch of the U.S. government. The latter led to enhanced powers for the president, reduction of legislative interference, and a “streamlined chain of command.” The Club was now formed: “..never before had a president and former president joined forces to defend the Oval Office agenda against the parochial interests of the rest of Washington.”

The Club became both a “woodshed” and a “rescue mission” for Kennedy, who attempted to dismantle the decision-making procedures established through the Truman and Eisenhower administrations. The young president discovered that he had much to learn; he followed Eisenhower’s advice in analyzing the Bay of Pigs disaster and consulted with Eisenhower, Hoover, and Truman in his handling of the Cuban Missile Crisis. When the presidential office was threatened by Nixon’s resignation, Gerald Ford quickly recognized that the power of the office “had to be preserved at all costs.” Knowing that one of the costs could be his political future, Ford pardoned Nixon, stating, “My conscience tells me it is my duty, not merely to proclaim domestic tranquility but to use every means that I have to insure it.”

Occasionally, a club-within-the-club would form. Ford and Carter, previously political opponents, became close friends, teaming up for dozens of projects. Reagan put Nixon “back in the game,” consulting with him concerning campaigning, and sending him to Russia to evaluate the shifting political climate. Clinton and G.H.W. Bush teamed up as a very effective “odd couple” in missions to aid New Orleans following Hurricane Katrina. Both men, suffering from “deep scars” from their presidencies, sought redemption and earned recognition through their assistance to Haiti. Clinton was also a very visible supporting hand to Obama in his most recent campaign.

The Club has not always run smoothly. Both Nixon and Carter, while making extraordinary contributions as diplomats for their respective seated presidents, had a tendency to “go rogue”: to oppose or alter the current administration’s policies, to promote their own agendas, and to manipulate public opinion through the media. The subsequent tensions were high, as each man tried to secure his historical significance by reaffirming  his international reputation.

Gibbs and Duffy believe that if the Club had a seal, it would carry the words, “Cooperation, Competition, Consolation.” Each member has sought to help the person in the Oval Office while protecting the power and the dignity of that office. Each member has also competed for “history’s blessings” while attempting to heal the inevitable scars inflicted in the politically volatile capital.

Ted Odenwald and his wife, Shirley have lived in Oakland for 43 years. He taught HS English at Glen Rock High School for all of those years plus one more. Now he is enjoying time spent with his family, singing in the North Jersey Chorus and quenching his wanderlust. Ted is also the Worship Leader at the Ramapo Valley Baptist Church in Oakland.