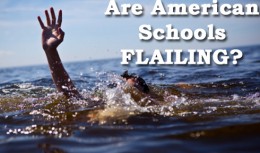 American schools are flailing – that is not a typo.

The educational industry in America, and many elected officials, are flailing their arms crying how America’s educational system is failing.

These cries of woe have led to new implementations such as the Common Core Standards; more frequent standardized testing being scheduled; new teacher evaluations being conducted; and, the  injection of hundreds billions of dollars into new programs and incentives.

Some of these changes have come to schools in Franklin Lakes, Oakland and Wyckoff. New methodologies on teaching math and reading have been implemented; new teacher evaluations statewide in New Jersey will be conducted this year; and, there will be the continued federal policies that reward states with money when standardized tests rise.

All these changes can leave some schools that are not failing flailing.

The growth of a global economy has created great interest in how American students stack up against their peers in other countries. In 2009 PISA exams, the United States ranked 14th in reading and 25th in math; but, when taking into consideration socioeconomics, the rankings change to 6th in reading and 13th in math – certainly room for improvement, but much better than the raw data would indicate.

The United States, out of 35 developed countries, is ranked 34th in terms of the number of children living in poverty – with just over 20% of America’s students living below the poverty line.

A lower socioeconomic level can often translate into children growing up in a situation where parents do not read to them at home, who may suffer from untreated chronic health problems, untreated learning disabilities, or live in an environment plagued by violence and crime. They are probably not exposed to museums, frequent a library, have the beneficial influences of music and art – and/or are simply lacking adults who can provide a responsible role model.

Disregarding that data, America has traditionally never scored high on international exams; and, when international exams first surfaced we regularly ranked at the bottom of the list. Oddly enough, we’ve actually been doing better over the years – especially with disadvantaged youth.

The new national obsession with standardized testing might give an easy measurement for political leaders to say, America is Number One in education – but it may sacrifice substantial benefits for an empty title.

Places like Shanghai, Korea, and Singapore regularly score at the top of the PISA exams, but just recently the Ministry of Education in China began a campaign to ease the emphasis on standardized testing. The new perspective in China is that standardized testing, “severely hampers student development as a whole person, stunts their healthy growth, and limits opportunities to cultivate social responsibilities, creative spirit, and practical abilities in students.”

It is true that there are many schools in America that are failing their students, some for generations, but overall there is no crisis in American education.

America has produced more Nobel Prize winners than any other country – more than double its nearest competitor. America has saved the world from tyranny in two world wars, put a man on the moon, built the Panama Canal, given the world Thomas Edison and Steve Jobs; and, America continues to be a land, not only of the brave, but of innovators.

Innovation always requires a certain level of intelligence, but intelligence is not always accompanied by innovation.

One thought on “Are American Schools Flailing?”